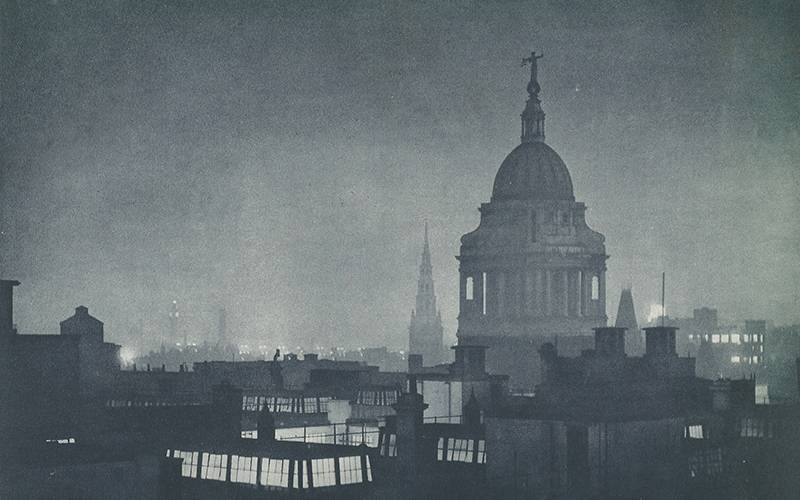 The emergence of electric lighting towards the end of the nineteenth century had fundamental and far-reaching effects on both the built environment and urban subjectivity. However, in London, light’s electrification was anything but inevitable or uniformly desired.

Competing interests, technologies and aesthetics combined to form a variegated and contested lightscape: one composed of hybrid, mutable and intersecting atmospheres – or “twilight spaces” – combining light, darkness and smoke, with technological, architectural and urban forms of varying opacities and translucencies. These environments constituted and were constituted through the diverse subjects who inhabited them, forming the objects and settings, both real and imagined, for processes as varied as slum clearance, smoke abatement, Christian missionary work, colonialism, anarchist bombings, women’s suffrage and aerial warfare; and with political implications for access, equality, mental health, consumer culture, and the perception of danger and difference.

This thesis proposes a jointly cultural, political and material history of light and vision in London during the period of Britain’s “electrification”. To do so, it uses a method called “topographic literary analysis”, whereby various literary representations of the city, detailing the experiences of a diverse set of real and fictional subjects, are cross-referenced against drawings, maps and photographs from the time, anchoring those experiences and subjectivities in relation to the historical environments and atmospheres within which they were produced.

This process of annotation and re-narration produces new, partial and situated accounts of historical experience; ones explicitly designed to foreground the political aesthetics of light. Through this, the thesis aims to contrast the richness and diversity of everyday experience with the limited, technocratic or formalistic understandings of light that have persisted within architectural practice and discourse since the Second World War.

Adam Walls studied architecture at Cambridge University and worked in practice in London before returning to pursue a PhD in Architectural History and Theory at the Bartlett School of Architecture. Adam’s thesis project, Twilight Spaces, investigates the transformation of visual experience in London during the period of light’s electrification. His work has previously been published in the Architectural Theory Review and he currently tutors at the UCL Writing Lab.