The edge of tomorrow 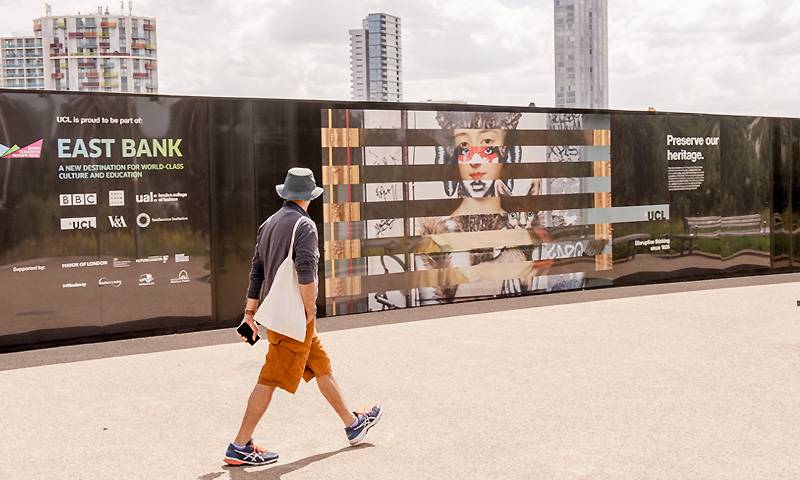 UCL East, the university’s largest single expansion in 200 years, has a radical academic vision: to confront the challenges of the 21st century through experimentation and collaboration between multiple faculties, disciplines and actors, sharing space in new ways.

Professor Paola Lettieri, Academic Director of UCL East, says that the new campus will bring together, and give life to, the true transdisciplinary nature of UCL. Eight of the university’s 11 faculties are involved in expanding to two new buildings on its East London campus. The Bartlett, alongside UCL Engineering, Life Sciences, and Arts & Humanities, has been involved from the start. Its pioneering venture – with UCL Engineering – in the Queen Elizabeth Olympic Park at Here East, which opened in 2018, was phase zero for the university’s long-term plans.

Lettieri is happy to say that the academic vision for the campus is already playing out at Here East, albeit on a smaller scale. “The modus operandi is there, which is the exposure of students to different disciplines. At UCL East we are going to reproduce that openness and transparency, with the concept of fluid zones and large, open atriums, so that whichever floor you’re on, you can look up or down and see what’s going on. Currently we don’t have that in our buildings in Bloomsbury. So we’re creating a natural situation where colleagues from all the various departments will encounter each other.”

The first two buildings, Pool Street West (2022) and Marshgate (2023), are paving the way to a different mindset, she says, a different way of thinking about how a university should work. “What kind of teaching, what kind of academic research, what kind of students, do we need to produce?” says Lettieri. “Having different programmes in the same space will naturally enable the cross-pollination of ideas, but here we are experimenting with making these interconnections more visible.” Lettieri emphasises that this isn’t about annihilating boundaries but revealing the value of being in the space, of people understanding each other more. “The philosophy at Here East is a strong example of the academic vision for UCL East.”

Pool Street West will be home to the Future Living Institute. There will be an Urban Room and Memory Archive on the ground floor, curated by the Urban Lab in collaboration with Culture Lab, both of which are cross-faculty entities. This space, designed for public engagement, will create opportunities for academics, students and partners from either lab to be exposed to what each other are doing. As Lettieri says, “the past informs the future”, and this space for exhibitions and events on the past, present and future of cities will enable exploration of London’s history, and the site in East London, through ideas and objects.

Ben Campkin, Professor of History and Theory of Architecture and Urbanism, and Co-Director of Urban Lab, is one of the UCL East Academic Leads representing The Bartlett. He says the Urban Room will provide space “to centre and extend forms of publicly engaged, collaborative urbanism that UCL and its partners have increasingly been experimenting with over the past decade”.

The Urban Room will be one of the UCL East spaces that is most accessible, at the heart of the campus, and an example of how the university is trying open up horizontal conversations, whether they’re with local communities, activists, artists or professional groups, with the distinct bodies of knowledge and working methods they bring. This is particularly important in the field of urbanism, says Campkin. “Certainly at The Bartlett, there are strong histories of people doing substantive research in East London and, since the 2012 Olympics, there have more and more people from across UCL engaging in partnerships there, as well as practitioners linked to The Bartlett who are based in the area, within the exciting landscape of existing social and cultural infrastructure.”

As a strand of activity within the Future Living Institute, the thematic of Global Urbanism is designed to accommodate the research agendas of a range of existing academic entities, such as the Urban Lab and The Bartlett’s Institute for Global Prosperity, as well as housing innovative new teaching programmes in areas such as Connected Environments and Architecture and Media. The Urban Lab has two new Master’s programmes planned, focused on global urbanism and London. Teaching will be linked to the new Urban Room as well as the other shared and specialist spaces in the Future Living Institute. “Currently Professor Jenny Robinson, Co-Director of UCL Urban Lab, leads activities on ‘globalising urbanisms’, and this is very much a collaborative endeavour, developing frameworks for engagements and dialogue with urban scholarship globally, across a diversity of urban experiences.”

The Future Living Institute will encompass five of the eight UCL faculties, all of which, through their activities, will be looking at how we tackle global challenges from different perspectives, from the planetary scale to the home. Robotics, for example, will sit alongside the Global Disability Innovation Hub. “How do you use technology to enable mobility and independent living?” says Lettieri. The Slade will have a space at the Institute looking at the role of robotics in the making of art, and there will also be a technology hub that revolves around Artificial Intelligence, bringing together The Bartlett Centre for Advanced Spatial Analysis (CASA) and UCL Engineering, to look at the potential for the Internet of Things (IoT). Much of this will connect up the landscapes of the Olympic Park, directly linking with Life Sciences through what’s being called ‘the internet of wild things’. Lettieri says: “We are building the campus in green space, so we are developing a whole range of programme leads within the Future Living Institute to understand what we can learn from how we use the buildings and how we can nurture and preserve the park itself.”

Professor Duncan Wilson at CASA, says the centre’s MSc in Connected Environments based at the Future Living Institute will train people up in the technical and applied areas of the internet of things – how data can be collected, visualised and conveyed back to key stakeholders. The park itself will be the testbed, as it has been already for many of CASA’s pilot projects in this area. Tales of the Park, in which digitally connected gnomes engaged with passers-by, was an early example. “It’s about helping us sense and understand the built environment around us,” says Wilson.

The notion of a multidisciplinary programme was a natural fit for Wilson, who in parallel to the teaching activity of the course, is also doing hands-on research at UCL East by trying to get as much digital infrastructure as he can designed into the campus and park environment from the start. “There is a vision of this being a smart campus and we’re involved in trying to specify exactly what that looks like.”

Wilson wants his students to be able to use this digital infrastructure once the buildings open to understand how people are using the park. “From a biodiversity and sustainability perspective, how do we run constant monitoring of the environment?” he asks. CASA has already been working with the LLDC on its sustainable smart district project and now UCL will be a part of it: “The nature of the Connected Environments MSc is hands-on learning through doing. In the first two weeks, the Master’s cohort are going to build something to measure something, say, plant moisture. They then have to keep that sensor running for the whole year of the course. So that requires students to interact with UCL Estates around how to power the sensor, how to secure it. These are the real challenges for deploying IoT devices. We want to create an environment at UCL East that allows experiments to happen experimentally.”

Following Pool Street West a year or so later will be the Marshgate building in 2023. This, Lettieri explains, will be home to the future of manufacturing and advanced propulsion, looking at such grand challenges as how we electrify the transport system, for example. The collaborative MEng between The Bartlett School of Architecture and UCL Engineering, currently running at Here East, will relocate to Marshgate.

The School of Architecture will have studio space on the fourth and first floors, and Bob Sheil, Director, says the new building will strengthen its focus on the intersections between engineering and architecture, technology and place, and policy and economic analysis (The Bartlett School of Construction and Project Management will also have a presence there). It also offers the chance to go back to the drawing board for everyone: “Design comes from evolution and occasionally revolution. Architecture thrives on provocation. Science thrives on having the autonomy to pursue one question. We all ought to be doing something that we’ve never done before.”

Sheil describes Here East, which is a consortium of six departments, as wonderfully exciting but says that Marshgate will be on another level. “A lot of the programmes we’re proposing will extend what we’re doing at Here East – breaking down silos, drawing closer to engineering, and removing barriers and stereotypes as to what you can do with that research and education. Diversity equips you to pioneer, and it will be another step in recognising how diverse a discipline architecture is.”

Sheil is keen that the activities at Marshgate have a complementary mission to Pool Street’s Future Living Institute. To that end, he and the UCL East academic leads are exploring whether to create a new forum. He explains: “It would be a collaborative forum for progressive education and advanced research that operates across The Bartlett and other UCL faculties, including Engineering and Arts & Humanities. We will work in partnership to deliver collaborative postgraduate programmes in engineering and architectural design, construction and project management and executive education, targeting building typologies and sectors where innovation is urgently needed.”

Lettieri echoes the sentiment: “UCL East is all about breaking down barriers that get in the way of tackling pressing global challenges. We’ve done a lot of talking about it, now we are going to make it happen.”