You might not think skateboarding would be the subject of scholarly study, but a growing number of academics believe it has a lot to teach about how to make cities better for citizens 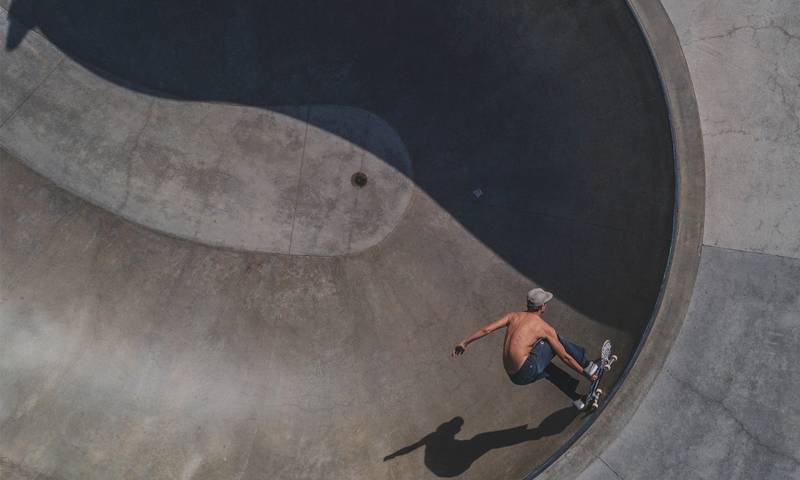 “Skateboarding is also a critic of consumerism, because skateboarders ride and use public space without paying for it. And a critic of the meaning of architecture, as they are only interested in its potential as a skateboardable object

The idea that skateboarding can be a boon for cities rather than a bane is sinking in, believes Iain Borden. As Professor of Architecture and Urban Culture at The Bartlett School of Architecture, a rider for more than 40 years, and an author on the subject, Borden is steeped in the activity. In his new book, Skateboarding and the City: A Complete History, he writes: “Skateboarding is being increasingly welcomed by a growing number of enlightened politicians, city managers and the general public, who all appreciate its help in addressing challenging social issues and in forming more diverse communities.”

What’s more, Borden believes skateboarding “challenges many of our society’s norms and conventions, positively contributes to contemporary culture and the economy, and helps open out city spaces to everyone”.

Dr David Knight of architecture firm DK-CM echoed this at a first-of-its-kind event earlier this year: “Skating is at the vanguard of a wider movement to rethink how we think about public space.” Dr Knight, who is researching how to reconnect communities with the power structures that define planning, was talking in June 2018 at Pushing Boarders, a two-day conference hosted by The Bartlett that explored the relationship between skateboarding and architecture, bringing together hundreds of skaters from around the world. The event was co-organised by two Bartlett PhD students, Thom Callan-Riley and Sander Hölsgens as part of a collaboration with Theo Krish and Phil Joa from the skateboard charity SkatePal, Stuart Maclure from Long Live Southbank and Dr Dani Abulhawa from Sheffield Hallam University.

“This was the first time that all the scholars from around the world working on skateboarding came together,” says Callan-Riley. “But at the same time, it felt like a typical skate event, with people sitting on their boards on the floor during the packed-out talks.”

How did skateboarding go from being a marginalised, even demonised, activity that was largely discouraged by the establishment, to a force for good, worthy of academic study? The answer lies in riders’ peculiar relationship with the built environment and how it reflects on the development of cities.

There are around 50 million riders worldwide, many of who frequent the thousands of urban skateparks. They also take their boards to city ‘spots’ – and this is where academia can bring insight, because riders’ relationships with architecture are completely different to those of the rest of the population.

“Where handrails, curbs and banks are at first glance part of a system of mundane signals, skateboarding transforms these elements into sites of energetic pleasure,” Borden writes in his book. “It is this focus on texture, surface and tactility which gives skaters a different kind of urban and architectural knowledge.”

Borden talks about skateboarding as a ‘performative critique’, an idea derived from Henri Lefebvre, the 20th-century French Marxist philosopher and sociologist, who introduced the concepts of the ‘right to the city’ and the ‘production of social space’. He believed that the human body is a site of resistance to the excesses of neoliberalism. Or, as Borden puts it: “If we lose control of so many other things in the world, we still have ownership of our bodies: when we ride up the side of a building or down a staircase, there’s a critique of production, of the idea that we should be working all the time.”

Skateboarding is also a critic of consumerism, because skateboarders ride and use public space without paying for it. And a critic of the meaning of architecture, as they are only interested in its potential as a skateboardable object. Riders therefore think in terms of an alternative ranking of architecture. “That’s something which is really important for architects to know,” says Borden, “your buildings may get used, interpreted and understood by a completely different set of criteria.”

Through his or her experiences in the modern metropolis, a skater’s enhanced awareness of balance, speed, hearing, sight, touch and responsivity culminates in a form of sensory mapping. Borden describes this as a different edit of the city. “You map the city according to angled banks, smooth surfaces and noisy bits. It takes us back to this idea that we want to feel more alive in cities.”

In parallel with this visceral experience is the continual ‘mallification’ of towns and cities. Over the last three decades, many places have become increasingly ‘mallified’ as opportunities for retail transactions. “They’re not a good model for what we want our urban space to be,” believes Borden, “they tend to be closed in, to only be about consumerism, and everything else is excluded, including the homeless and skateboarders. That makes them safe but boring.”

What’s more, shopping malls suggest a passive form of bodily behaviour, he adds: “Walk don’t run, look don’t touch; your body is reductive, there’s no running jumping, sweating, shouting, being dynamic. For me, one of the most important things skateboarding does is to suggest that urban space doesn’t have to be like that.” So, by taking advantage of space without paying for it, skateboarding is indifferent to these purposes of exchange. 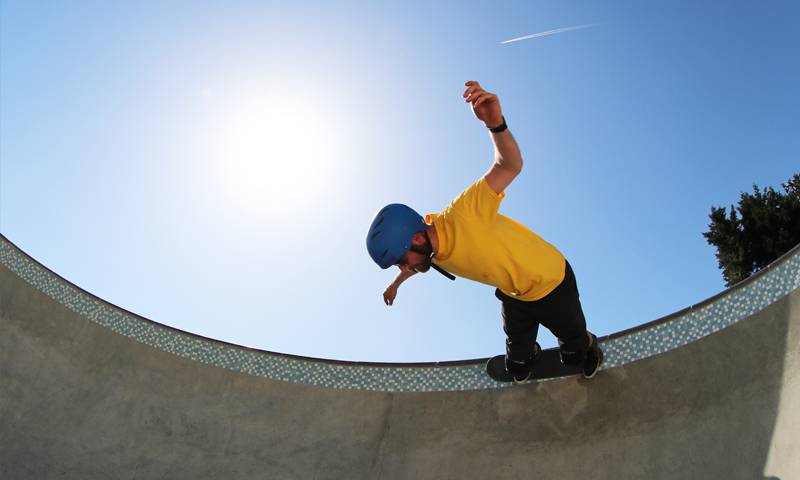 It’s not just malls. Whole parts of cities are unwelcoming to all but sensibly-behaved consumers. “Where the homeless are routinely ejected from business and retail areas by odd-shaped benches, window-ledge spikes and doorway sprinklers, so skaters encounter rough-textured surfaces, obstructive blocks, restrictive chains and scatterings of gravel,” Borden writes in his book.

One concern is that cities are becoming too uniform, homogenous, safe and restricted. The privately-owned public realm model, while popular with many developers, is not always what people want. Along the River Thames in London is the world’s longest continually skated street spot: The Undercroft. Tucked under the Brutalist Queen Elizabeth Hall, it was a space intentionally left over by the architects in the 1960s for unpredictable uses. Campaigners fought to save it as a skateboarding venue when it was threatened with redevelopment. “The public was making a statement about what we want our cities to be,” says Borden, defining it as “a bit edgy rather than yet another coffee stall”.

Funds are still being raised to restore The Undercroft to the original designs of the GLC Architecture Department. “We are looking to start construction in early 2019,” says Stuart Maclure, Project Manager of Long Live Southbank, which spearheaded the campaign. But the end goal, Maclure says, “is to influence a more open and democratic planning system, city and society”.

The Undercroft is an enlightened approach in microcosm. There are other instances where people have tried to create bigger public realms that are sympathetic to skateboarding. It’s already happened in Innsbruck, and Hull has announced it will become the UK’s first officially designated skate city, aligning itself with the highly successful Skate Melbourne and Skate Malmö campaigns. Borden holds up the latter as the exemplar.

For Borden, the next step could be a tie-up with The Bartlett’s new Real Estate Institute. Under consideration is an event about urban design to explore “what a skatepark or multipurpose public space is, how you welcome skaters – something more nuts and bolts for policy-makers”.

Meanwhile, Pushing Boarders was such a hit that a future event is being mooted. “We found that there is a huge appetite for this kind of event, and that skaters are very open to discussing, exploring and even challenging the community they inhabit,” says co-organiser Theo Krish at SkatePal, a London-based charity that builds skateparks in Palestine.

Pushing Boarders also helped the academics, according to The Bartlett’s Callan-Riley: “A lot of the work we do as academics should be situated within the scenes and cultures that we’re studying, rather than just researchers talking about their research.” A flip side of this was to expose boarders to the idea that their hobby could be a legitimate area for research. Typically, explains Callan-Riley, boarders going to university who want a job in skateboarding tend to do graphic design, photography or film-making; one of the aims of Pushing Boarders was to show they could do this through the humanities, social sciences, and schools for the built environment too.

Skateboarding is an urban phenomenon, and more study makes sense to Borden because lot of the world’s most pressing issues today seem to flow through skating. “Through the human body come issues of sexuality, class, race, gender, age, and all the things we find meaningful in life, what food we eat, what brands we like. There’s nothing in between skating and the world outside, it’s a direct engagement. You just need your body, flat shoes and an inexpensive bit of equipment.”

One of the discussions at the 2018 conference Pushing Boarders, hosted by The Bartlett, looked at how to build a skate-friendly city. One shining example is Malmö, which has been transformed from a humdrum, post-industrial city in the south-west of Sweden into a skatersí paradise.

“Malmö is the most progressive city in the world for skateboarding,” says Borden, "It's managed to embrace, integrate and manage skating in its urban fabric.” There is even a secondary school whose curriculum is based on skateboarding.

How has Malmö done it? For the past two decades, its skaters have organised themselves to engage with City Hall. Inspired leadership within the corridors of power was minded to fund new skate parks – such as an old brewery, Bryggeriet, which became Malmö’s first indoor facility – and international competitions. As well as myriad designated areas, the city offers up its parks, plazas and public sculptures to boarders.

The former brewery also houses Bryggeriets Gymnasium, where the entire school day is built around skating. The students follow the national curriculum (English, social sciences, maths and Swedish), and get skate classes two afternoons a week. The idea is that, as well as studying for a high school diploma, art, photography and film are thrown in, and skating is used as a reference point across all subjects.

Source: Skateboarding and the City: A Complete History by I. Borden, Bloomsbury, 2019