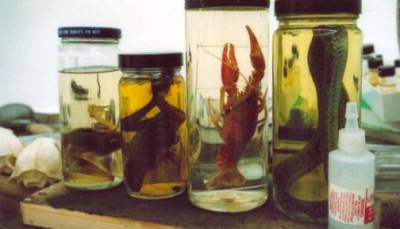 Prepared specimens appear in many guises: as monstrous or typical organs preserved in formaldehyde and kept in glass jars not unlike pickled food, as stained and fixed tissue slices, or as skilfully arranged mounted animals. They may be found in cabinets of curiosities, in the laboratories of histologists, in anatomy theatres or in natural history collections, but nowadays equally in art galleries, the shop windows of fashionable boutiques, or horror films. This research network is concerned with such kinds of preserved natural objects, in particular with anatomical wet or dry preparations and taxidermy. It explores the hybrid status of these objects between nature and representation, art and science and studies their fabrication, history and display.

The network is a collaboration between the UCL Department of History of Art, UCL collections, in particular the Grant Museum of Zoology, the Hunterian Museum, London and the Natural History Museum, London.

The Aesthetics and Politics of Specimens on Display

International conference at the Department of History of Art, UCL 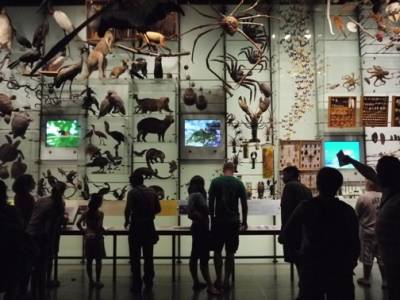 Taxidermy-Animal Skin and Colonial Practice
Workshop in collaboration with the Natural History Museum, London
12-14 May 2011 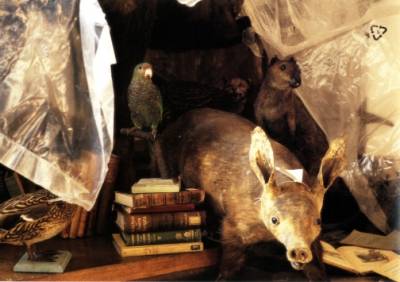 Mark Dion: An Account of Six Disastrous Years in the Library for Animals (detail), Installation at the Centrum Sztuki Wspólczesnej, Zamek Ujazdowski, Warsaw 1992

This first workshop, conceptualised by Petra Lange-Berndt and carried out in collaboration with Bergit Arends (Curator Contemporary Art, NHM), focused on power relations inherent in taxidermy, the preservation of animal hides. The precondition of the seeming lifelikeness of mounted specimens is the attempt to hide the work of the taxidermist and thus to preclude the fact that we are actually dealing with a dead animal. But more importantly this event investigated how the artful arrangement of skin is linked to narratives of imperialism and colonial supremacy, to notions of "exploration", "discovery", and "classification". We discussed the many processes of making taxidermy and its intermediality as well as its institutional display or the impact of emerging ecological theories. Special attention was paid to the role artists have been playing since the beginning of the twentieth century in calling attention to the aesthetics and politics of natural history collections. Therefore, contemporary strategies that question histories and formulate alternatives to practices associated with them-such as vegan taxidermy-as well as issues of zoological curation, display and conservation were considered. Areas for further discussion are clearly the missing social history of the taxidermist, to counter a European and North-American perspective by considering a broader range of institutions around the world, the management of decay within collections, ways of making uncomfortable objects public, and the unease encountered by considering the use of taxidermy and other animal remains in applied arts such as trophy furniture.

Wet-Preparations: Anatomy, Pathology and the Body Contained
Workshop in collaboration with the Hunterian Museum, London
9-11 June 2011

The workshop conceived by Mechthild Fend and carried out in collaboration with Sam Alberti (Hunterian Museum) focused on anatomical and pathological preparations, and predominantly wet-preparations. The shared agenda was to look at historically shifting attitudes towards the preservation and subsequent display of human body parts that were not always ranged in the ethical and pseudo-religious category of 'human remains' as expressed among others in the many historical debates of the pros and cons of preserved specimen versus wax or papier maché models. The workshop looked at the transformations the body of a formerly living person undergoes when it is turned into segments that are arranged and prepared, and eventually becomes a preserved specimen, and considered the further fate of such specimens as well as their handling, display and conservation in private or public medical collections. It considered dissection (the singling out, cutting up and hence making of body parts) as an initial step in the making of preservations, which were not necessarily meant to last forever, but at times decay was only delayed for shorter periods, in order for arranged body parts to be retained by a draughtsman or studied by students. Once in a container, specimens are not only preserved for visual inspection, but also to be taken out of their jars, handled and re-examined. A further issue was the unease prompted (at least today) by parts of the human body prepared for purposes other than medial research and teaching, such as human skin flayed and tanned for bookbinding. Finally, a question raised by practices of curating and conservation is what constitutes the specimen a museum object and collectible historical item (rather than an object of medical research) - the organic material only, the liquid, the jar? Do different ethics apply to these materials and which of these elements can and should be preserved today? An issue to be further discussion will be the ethics of the preservation or disposal, the use and display of preserved specimens today.