The UCL History of Art department began awarding degrees in the subject in 1965, but the presence of the History of Art in the College goes back much further, even beyond the founding of the Slade School of Art in 1870. This film touches on some of the major moments for the Department from the founding scholars arriving as emigres from Germany to ideological changes of the 60s-80s to greater interdisciplinary range and development from the 90s onwards.

History of the Department 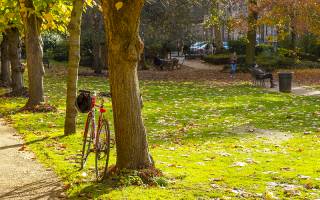 The UCL History of Art department began awarding degrees in the subject in 1965, but the presence of the History of Art in the College goes back much further, even beyond the founding of the Slade School of Art in 1870. The first person to give lectures on the History of Art in the College was the remarkable figure of Gottfried Kinkel, a German émigré who had been professor of art history at Bonn University, but whose active participation in the revolution of 1848 had caused him to be jailed under a life sentence. He was sprung from Spandau prison by a devoted student disguised as a guard, and he made his way to London where his romantic presence and exploits made him a public figure. He was a compelling figure and a charismatic lecturer, but he excited the jealousy of Karl Marx who saw him as a threat to his leadership of the German community in exile. In 1853 he gave a series of lectures on medieval art at UCL which were an enormous success and brought in crowds of admirers. Marx, who evidently attended the lectures, was sarcastic about them and claimed that Kinkel gave the lectures without payment 'in the hope that he will be able to worm his way into the post of Professor of Aesthetics at London University'.

This did not happen and there is no evidence that the history of art was taught again before the foundation of the Slade. History of art in some form was taught to art students from the foundation of the school, but it was only at the beginning of the 20th century that notable figures began to teach there. D.S. McColl taught the subject from 1903-09, and in the latter year the famous critic Roger Fry was employed to teach a course entitled 'The Appreciation of Design in the History of Art' in a position he held until 1914. These were part-time lecturers, mainly employed elsewhere, but in the 1920s the Slade Professor Henry Tonks felt the need for a stronger presence for the subject, to complement his own emphasis on traditional drawing methods. He was able to convert an endowment left by Sir Edwin Durning-Lawrence in 1914 into a chair in the History of Art. Durning-Lawrence himself had no recorded interest in the subject; he was famous only for his passionate belief that Shakespeare could not have written the plays under his name, and he wrote books claiming Francis Bacon as the true author. The first holder of the chair was Tancred Borenius, known as 'the Flying Finn', who remained professor until his death in 1947.

He was succeeded in rapid succession by two of the most eminent art historians of the century, Rudolf Wittkower and Ernst Gombrich, who both gave notable lectures to Slade students, notes for which are still preserved in the Department. They also brought in outside lecturers such as Isaiah Berlin, and younger scholars of note including Francis Haskell and Michael Kitson. Gombrich was succeeded by another German émigré, Leopold Ettlinger, and it was he who, in 1965, set up a separate Department of the History of Art, teaching a BA in the subject and several combined honours degrees with other subjects, while continuing to provide teaching to Slade students. Under his successor, the distinguished Italian Renaissance scholar John White, the Department expanded considerably, consisting by the time of his retirement in 1990, of nine teaching staff. Expansion continued under his successor David Bindman, under whose headship was introduced the current MA programme, Core Courses for the BA and MA, and the History of Art and Material Studies (HAMS) course. He was succeeded in succession by Helen Weston, Thomas Gretton, Tamar Garb, Frederic J. Schwartz, Alison Wright, and by the present Head of Department, Robert Mills.

In its 50 years of separate existence the History of Art Department at University College London has become recognized as one of the most distinguished departments in its subject in the world. Its staff, which like its students come from many different countries, are preeminent in their respective fields of research, and many of our students have gone on to notable careers in the academic world and in museums. Its teaching methods, with a carefully structured balance between theory and working with the object, have over the years become a source of pride to the staff and a model for other departments.

Take a look at the Department of History of Art Timeline.