The Institute for Archaeo-Metallurgical Studies (IAMS) is an international body whose purpose is to initiate and promote research into the origins and developments of mining and metallurgy and its culture-historical significance, from its earliest, prehistoric beginnings to recent times. IAMS is a registered UK charity affiliated to the UCL Institute of Archaeology, and associated with the Wolfson Archaeological Science Laboratories.

The active research of IAMS and its teaching programme are undertaken by the members of its Scientific Committee and Research Associates, forming a unique group of highly qualified specialists from UCL and the Royal School of Mines, Imperial College London, as well as from educational and technological institutions of world repute in other countries. It is thus actively supported by the collaboration in research and teaching of experts from a wide range of disciplines, including archaeology, anthropology and history, as well as metallurgy and chemistry, geology and mining engineering.

The Institute for Archaeo-Metallurgical Studies is a research led organisation which maintains strong links to both the academic and related commercial metallurgical fields. This is reflected in its board of trustees and its scientific committees which strive to continuously promote the value of the Institute to both scholars and industry. 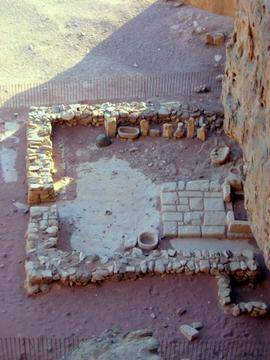 The beginnings of the Institute for Archaeo-Metallurgical Studies (IAMS) are tied to the discovery and excavation in the 1960s of the site of Timna in the Arabah Valley of the Southern Negev, Israel, by Professor Beno Rothenberg. After a decade of extensive surveying and excavation, Timna quickly emerged as one of the earliest evidence of large scale mining and smelting of copper in Near East and led to a series of new discoveries and interpretations on the nature of ancient metallurgical technology. Soon after the announcement of the uncovering of an Egyptian temple located in the center of the mining complex, Professor Rothenberg was invited to give a series of lectures in London and, as a result of this, was invited to exhibit his discoveries in the British Museum in 1971.

Whilst the exhibition was at the British Museum, Professor Rothenberg was approached by Sir Mortimer Wheeler, at the time Secretary of the British Academy, and Sir Val Duncan, Chairman of Rio Tinto Zinc Co., with the idea of setting up a London-based international group to follow up the work and widen its sphere from the Middle East into Europe. With the help of prominent businessman Sir Sigmund Sternberg as chairman and financier along with other leading people in the metallurgical world, the Institute for Archaeo-Metallurgical Studies was formally established in 1973. Since then, it has developed into a teaching and research institute, based at UCL's Institute of Archaeology. It was through this affiliation and the new research facilities, as well as the long-term generous support of the Volkswagen Foundation of Germany, RTZ, British, German and American metal companies and several of the private merchant members of the London Metal Exchange (LME) that the Timna research program could be followed through in great depth from a series of large-scale excavations in the Timna mines and smelters in 1974 to 1990, to experimental archaeology as well as into modern mathematical modeling of processes and installations. Due to this systematic, long-range research, Timna has become a world-wide textbook for early copper metallurgy.

Since its founding, IAMS has been involved in teaching a number of archeometallurgical courses and continuously strives to expand our knowledge of ancient metallurgical practices through its own research as well as funding visiting scholars and doctorate researchers at the Institute of Archaeometallurgy.

In the 1990s, IAMS began a large scale investigation of the prehistoric, Phoenician, and Roman mining and smelting activities at Rio Tinto in southwest Spain, and in the new millennium, attention has shifted towards the far east with a number of doctoral research projects focused on various aspects of mining, smelting, alloying, and casting technology.

In 2002, under the acting directorship of Professor Thilo Rehren, the IAMS newsletter became a fully peer reviewed journal aimed at providing critical research in the field of archaeo-metallurgy to a wider academic audience. In 2004 UCL and IAMS were awarded a grant from the European Commission Framework Programme 6 under the Marie Curie Action, to host over the next four years a number of PhD and Masters students and provide them with Early Stage Training (EST) in the fields of materials science, conservation, and GIS applied to archaeology. Since then, Professor Rehren has assumed the mantle of full directorship.