Dr Iain Chessell (BSc Pharmacology 1990) credits UCL with providing him with a deep understanding of the core principles of pharmacology which he still uses 30 years later at AstraZeneca. 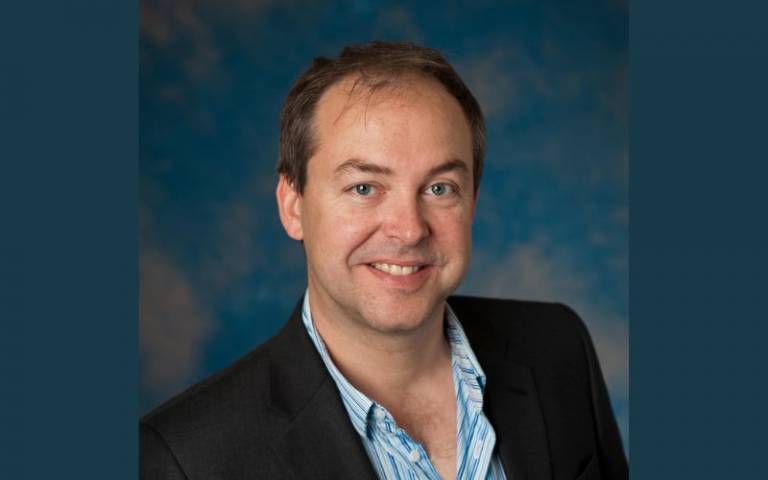 “I wanted to make a difference; I wanted to do something that was productive,” says Dr Iain Chessell about his decision to study pharmacology. “I was intrigued by the fact that for almost every disease there’s a drug treatment, whether it be cancer or a headache or something else. I had a long-standing interest in how chemicals interact with the body and how drugs work, and pharmacology really is the purest study of that.”

When researching pharmacology, Iain discovered that many of his textbooks were written by scholars at UCL, making his decision to undertake his undergraduate degree at UCL (in the Faculty of Life Sciences) an easy one. Reflecting on his time as a student, Iain recalls “the really, really high quality of academic tuition” he received, including the personalised support and the interactive way his lectures were taught.

Iain is now Head of Neuroscience at global, science-led biopharmaceutical company, AstraZeneca, where he is responsible for developing drugs for neurological diseases including Alzheimer’s and Parkinson’s disease. “Our interest is disease modification so we’re not looking at symptomatic relief; we’re looking for cures. We’re trying to either prevent the disease from developing at all or prevent it from progressing any further once somebody has been diagnosed,” Iain explains.

He still uses the knowledge gained from his course to this day, stating: “The fact that 20 to 30 years later the principles of pharmacology that I learned at UCL are still relevant and that they’re helping me to guide principles for everything we do in a company like AstraZeneca is incredible. I don’t think many people can say that the knowledge they learned in their degree is still relevant 20 or 30 years later; I’m proud to be able to say that.”

Iain’s team at AstraZeneca are also active within the area of chronic pain, identifying new therapies for different types of pain including osteoarthritis, chronic back pain, and some neuropathic pains. The team work on numerous clinical trials at different stages at any one time and Iain is responsible for looking after that portfolio, identifying the best use of their resources, and ensuring that studies are running to time. He suggests that the core principles of pharmacology that he learnt during his undergraduate degree help him to understand the data that his work generates and make decisions based upon this data. “A lot of the things that I learned during my undergraduate studies are the central core ingredients to everything we do every day,” Iain reveals.

After completing his bachelor's degree at UCL, Iain studied a Neuroscience PhD at the UCL Queen Square Institute of Neurology (then called The Institute of Neurology). To those considering a career in the life sciences industry, Iain recommends taking a similar path. “Those with a PhD are recognised within the industry as being within a very small percentage of those with a very highly specialised skill that you can’t get elsewhere,” Iain explains.

In addition to equipping him with the invaluable skills needed in his career, Iain says that UCL provided him with strong relationships and connections that have lasted a lifetime: “I’m still friends with the person I sat next to on my first day, in my first lecture, and someone else I know from UCL is going to be the examiner for my current PhD student.”

Iain continues to play an active role in UCL life in his role as a visiting professor. “Through this, I have reconnected with some world-class scientists, and I’m involved in discussions with people at UCL about how to collaborate further.”