Why Team GB long jumper Abigail Irozuru is giving the gift of time to the next generation of UCL alumni. 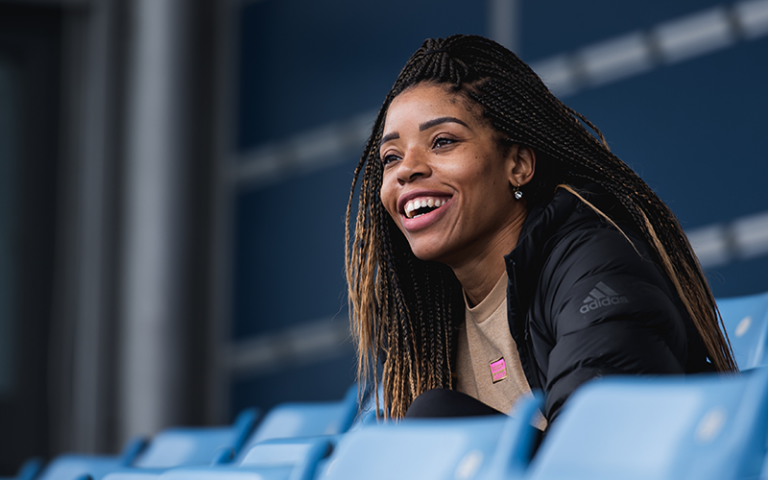 Abigail Irozuru (UCL Laws 2012) has boundless energy. She is one of Britain's top long jump athletes, a business owner, a motivational speaker and coach. She’s also a UCL graduate – and extremely proud of it.

Despite her packed schedule, in 2020 Abigail began volunteering for UCL – from mentoring students to sharing inspirational words for International Women’s Day. Her guidance has been invaluable during such a turbulent year, and it’s for this reason that Abigail has been shortlisted for the UCL Alumni Volunteering Awards 2021.

“I think UCL is awesome,” she says. “I want to support people who are attending to make the most out of their experience. It really is just that idea of contributing, however small or large, to support someone's development.”

From climbing trees to Team GB

Abigail’s mother encouraged her to get involved with various activities from a young age. She started gymnastics aged three, with trampolining soon after. She says: “I was nicknamed Tigger in gymnastics, so that transfers really well into being a long jumper.”

Following in her brother’s footsteps to the Air Training Corps aged 14, she entered an athletics competition – dominating in the long jump. She says: “Ian Wiltshire, my future coach, said 'You're pretty good at this, do you want to come to Sportcity and do some training?’ And that's where it started.”

Abigail began competing in 2006 and soon established herself as an elite junior athlete with an extensive list of achievements. While many might have put their education on hold to embrace the intensive training, Abigail decided to follow a life-long passion and take a law degree at UCL.

She fell in love with university life and, despite her training, found time to enjoy everything it had to offer – from nipping to Paris for the day during Freshers’ Fortnight to embracing different cultures through the Afro Caribbean Society. She also spent a year in Aix-en-Provence with her course, studying the French legal system and developing strong friendships within the small cohort.

“I loved the general vibes – the lectures, the seminars,” she says. “My final year was probably my best year but it was also the toughest, as it was when I was aiming to get to the London Olympics.”

Don’t call it a comeback

Despite narrowly missing out on London 2012, after graduation Abigail’s athletics career continued to blossom. But then a series of injuries ruled her out of the 2016 Rio Olympics and she decided to retire from the sport. It was at this point that she set up AMPLIFY Learning, a business dedicated to developing resilience and nurturing wellness through tuition and coaching.

Proving the true power of resilience, Abigail rejoined the world of athletics in 2019. It’s something she’s extremely proud of. “Returning to the sandpit was a feat in itself,” she says. “Knowing that there is potential not to achieve the Olympic dream, and still doing it despite the odds, I'm proud of myself for that. And the results have been really positive this time around.”

Indeed, at the time of publication, Abigail is about to take part in the delayed Tokyo 2020 Olympic games – a testament to her dedication and resilience.

In the midst of the COVID-19 pandemic in 2020, Abigail re-engaged with UCL through the UCL Coffee Connect programme. Since then, she’s repeatedly put herself forward to get involved. She (virtually) congratulated the class of 2020, wrote an article for the 2021/22 prospectus, used her platform to advocate for UCL and shared candid words about smashing the glass ceiling for UCL’s International Women’s Day celebrations.

Abigail has also been part of the UCL Skills Based Mentoring Programme, working with a student from an underrepresented background for six months. “I wanted to help my mentee establish some goals, not just career-wise but holistically, with health and especially mental health,” she says. “Trying to bring that sense of relief, peace and equilibrium in her life, and noticing the change over time, has been really rewarding.”

When asked why volunteering is so important, Abigail says: “I think we often believe that there's not much value in volunteering but we all have our own unique gifts, talents and thoughts that might change someone’s life.

“From the perspective of a black female, it's important to have representation across different disciplines, and as a sportswoman, I want to show how to juggle high performance in your field and academically. We're told we can't have it all and I understand there needs to be balance, but it’s about thinking how much you can achieve in the time you have. I want to help people with that mindset shift.”

Interested in giving back to the UCL community? Explore our volunteering opportunities.