The importance of seizing opportunities for Bake Off finalist and UCL alumna Crystelle Pereira. 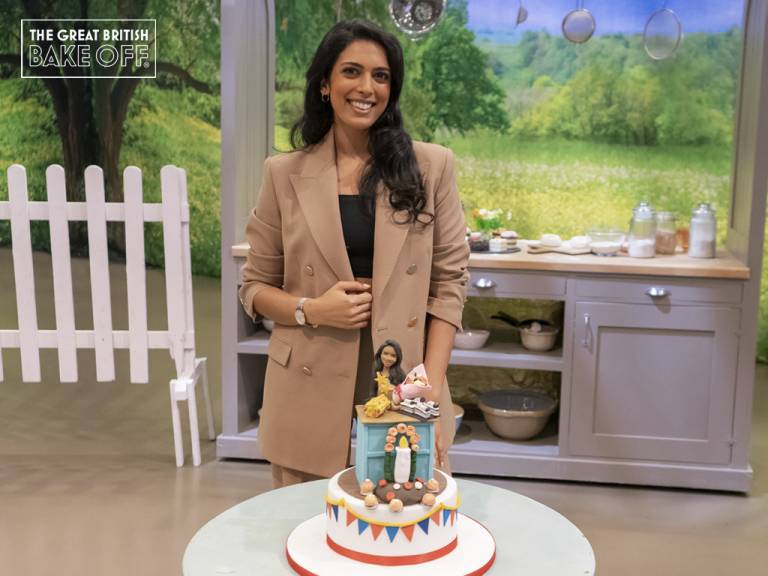 Despite having baked for just three years, Crystelle (BA Modern Languages 2017) proved her exceptional baking skills by reaching the final of The Great British Bake Off 2021. Food and cooking have always been Crystelle’s great loves. “Being from a Portuguese- Goan family, food is the most important thing in our house,” she says. “If we have friends over, we will make a feast. And if someone comes to our house but they don’t eat, we will be very offended. It is just how we are wired!”

Growing up in London with her parents and two sisters, Crystelle adopted the role of chief taste tester, sampling her mum’s Goan curries while developing her palate as well as her cooking skills. But she only started baking seriously in 2018 when, looking for any excuse to be in the kitchen, she accepted her sister’s challenge to bake and decorate a cake for her birthday.

Transitioning from a beginner to an expert in just a few years may seem like a big step. But Crystelle says she enjoys taking on new opportunities and challenges, boosted by a confidence she thinks UCL helped instil in her.

Impressed by her baking creations, it was Crystelle’s family who encouraged her to apply to The Great British Bake Off. “I applied thinking I wouldn’t get on – it was such a surprise when I was told the good news,” says Crystelle.

After securing her spot on the show, Crystelle says she initially felt a sense of imposter syndrome. “On day one, I called home and told my family that I didn’t think I would last very long. The other bakers were so much better than me!” Fortunately, with the support of her family, Crystelle didn’t let her self-doubt hold her back. “I told myself that it was a massive achievement to have even got onto the show. Whether I was going to last one week or ten weeks, I decided to just let myself enjoy my time.”

Crystelle says she has always tried to approach life with the same mindset. “From school to UCL to the Bake Off tent, I have always tried to avoid expecting far too much from myself. Instead, I focus my efforts on working hard and enjoying the experience. Whatever else happens, happens,” she explains.

With a renewed outlook, Crystelle grew in confidence over the series and secured a place in the final, receiving two Hollywood handshakes and Star Baker awards along the way. Crystelle says the curried chicken and potato terrine pie, which won her her first Star Baker award, was the highlight of her time on the show. “I loved that week because I could combine my love of cooking and baking. This bake was particularly special as the recipe was from my late great grandmother and it allowed me to showcase food from my Portuguese-Goan heritage. Everyone thinks of Indian cuisine as a homogenous category, but I really wanted to show how diverse Indian food is.”

Although Crystelle hadn’t yet taken up baking when she was at UCL, her passion for food continued to flourish as a student. A common pastime was scoping out some of her favourite restaurants in London. “London is one of the best food cities. My favourite restaurants include Hoppers, for the best Sri-Lankan food; Chotto Matte which serves fusion Japanese Peruvian cuisine; and Bancone - the fresh pasta there is amazing!”

Crystelle says that her love for food is born from a love of exploring different cultures. It comes as no surprise then that Crystelle chose to study languages at UCL. “Deciding to study French and Spanish was a no-brainer. For me, it was all about doing something I loved,” she says. “As part of my studies, I was able to spend a year abroad which was a real highlight. I tried to immerse myself completely in the culture; I worked in offices where I had to speak the language, I chose to live with native speakers, and I tried my hand at cooking local dishes. It is the only way to do it!”

Alongside her studies, a big part of Crystelle’s UCL experience was being a member of the Musical Theatre Society. “Much to my surprise, I managed to land a lead role at the Bloomsbury Theatre after my first audition. I couldn’t believe it!” She says. Crystelle explains that UCL made her become a well-rounded individual, having been encouraged to take advantage of the wealth of extra-curricular activities available. “Involving myself in new and wide-ranging activities helped me become more comfortable with pushing myself out of my comfort zone. I left university feeling like I had grown in confidence. This confidence is something that has helped shape my career and get me to where I am today.”

After graduating from UCL in 2017, Crystelle completed an internship at Goldman Sachs where she now works full-time as an analyst. The golden thread to her diverse set of experiences? Crystelle says, “I try to seize all the opportunities that come my way. You always learn more about yourself that way. For example, musical theatre, Goldman Sachs and Bake Off are all things I never thought I would do, but I learnt to be proactive about taking on new challenges and that is how I ended up here. You’ll be surprised at what you can achieve when you challenge yourself.”

Crystelle says that this outlook will guide her next steps. She adds, “I would love to further explore cooking and baking and educate people about Portuguese-Goan cuisine. We will see what the future holds. I will continue to take the opportunities that come my way and see where that gets me.”