Strictly speaking, there is no Chinese translation of the concept 'privacy'. The Chinese word 'yinsi' is widely used when it comes to the topic of privacy in China. However 'yinsi' in Chinese means 'something secret which should be hidden from others', made by the combination of two characters, 'yin' (hide) and 'si' (secret, even with the indication of 'illegal'). The negative connotation fits traditions of collective culture. Even in this factory town, surveillance in work and home life is ubiquitous, as is the belief that anything that is hidden from others must be something shameful or bad.

The first time Cici (17), a hairdresser's apprentice, heard the word 'privacy' was in a TV soap opera a few years ago. The word sounds very fashionable and modern to her. In the collective dormitory where Cici lives, she has almost no private space. Four young girls sleep together in two king size beds in a basic room, without any other furniture. All personal belongings can be seen at a glance. Previously in the factory she shared a single room with eight female workers.

"At night, everyone was talking with their boyfriends on the phone, as noisy as the food market…there seemed to be no secrets at all because you can always hear each other and see each other."

In order to keep some secrets, Cici started to text more on QQ rather than talking on the phone with her boyfriend at that time. Like Cici, the majority of migrant workers in this town never experienced a private space outside of the gaze of others. In this context social media afforded an experience of privacy and legitimised the right to privacy.

"I am totally free on my QQ. People who can see my profile are my friends and won't mind what I do online, as for those pedantic idiots, they can't view my QQ…That's my privacy, isn't it?" Cici, 17. 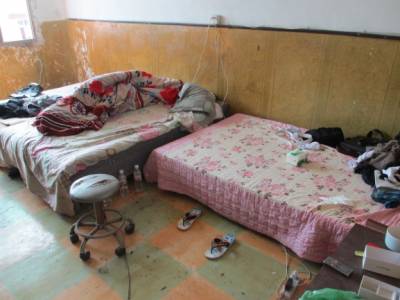