Caste is still a major component of social stratification in India, with its own rigid hierarchy. Residential neighbourhoods in Indian villages are often divided on caste lines, though some, including several villages near this fieldsite, are occupied by just a single caste.

Rajeev, an engineer from a middle-ranking caste, hails from one of those single-caste villages. Most young men under 40 from his village are on Facebook, where they join their caste-based interest group. Several own small businesses and are members of a political party that represents this caste. All of these men expand their Facebook friendships, based on caste membership. They also ensure that no young unmarried women from their village are on Facebook, fearing that this might lead to issues of romantic relationships with lower caste men.

Rajeev studied Engineering in a college at Panchagrami and has friends across the spectrum of castes. However, he is careful when it comes to friending classmates from lower castes, since his village friends might disapprove, feeling that this would pollute or bring dishonour to his caste or political party. Rajiv disagrees, but rather than cause a problem, he created a separate Facebook profile strictly for his classmates. This profile does not display his photo and uses a name that only his classmates know. He also stays clear of posting or liking anything that might even remotely indicate his caste, or for that matter any other caste. After graduating from Engineering, Rajeev went on to adopt the same strategy for his friends from work. This double profile allows him to appear in a different light to his urban friends, while at the same time ensuring that his caste friends aren't offended. 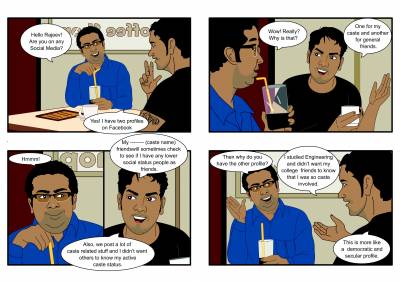