Sometimes the loss of privacy can be devastating, not just to an individual, but to a necessary social institution. An extreme example is the fostering of children who need protection from their own families. A foster parent recalls:

'One incidence of Facebook causing issues was when a young girl saw that her birth mother had started slagging her off on Facebook. Added to the fact that she's (the birth mother) named another female that her father is having a relationship with. The daughter, having all these emotional upheavals, because she sees herself within all this, promptly trashes the foster carer's house… windows, doors… and just goes crazy…

There is no privacy within the internet. For instance, one young lad had a smartphone. The birth parents said "well where are you?" Google map: "Oh I'm here dad." Twenty minutes later the father is at the front door of the foster carer's, banging the heck out of the door saying "give me the kid back"….. That would then instigate the children to be moved again.

The foster carers feel very vulnerable once the child's father and other relations know where they live. They might then try to get the children to leave their phones downstairs at night time when they go to bed. Otherwise there is now the danger that the parents will phone up the children at night. But then the children claim it is against their human rights to be deprived of their phones. All of which makes a very difficult task even harder." 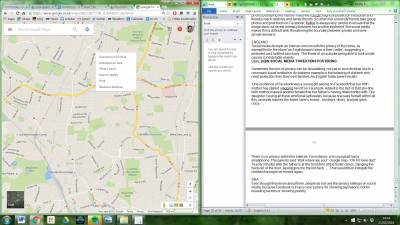