Why do Argentine politicians use social media?

According to the last national survey conducted by the Ministry of Culture during 2014, half of the Argentine population has a Facebook profile and it is the most popular web page in the country. This report also states that a quarter of Argentineans are Twitter users.

With this scenario, social media has become a useful tool for Argentine politicians.  Arguing that social media allows communication without media intermediaries in a two-way communication dialogue between politicians and citizens, politicians promote the use of these platforms, especially Facebook and Twitter for communicating their (personal) ideas, programmes and measures. 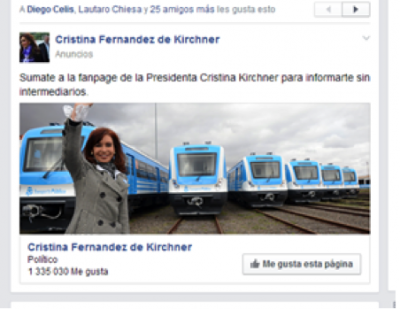 Cristina Fernández, (president of Argentina), Mauricio Macri (mayor of Buenos Aires), Daniel Scioli (governor of Buenos Aires province) and Sergio Massa (national representative) are the most popular politicians in Facebook and Twitter.  These last three are presidential candidates.   Massa is the only one that doesn´t use Instagram.

After having analyzed the Facebook and Twitter platforms of these four politicians for my research, I found that social media followers prefer non-political comments and easy-to-read posts for sharing, retweeting or commenting. For instance: the most popular tweet coming from Cristina Fernández was the joke she made about the Chinese accent, during her latest formal visit to that country (February 2015). In Scioli's Twitter account, his Seasons Greetings for the New Year  received the double of retweets than those announcing new security measures for the province of Buenos Aires.  In February, in Massa's Facebook profile the poignant picture of a peaceful street march demanding justice attracted 48,275 likes. The same happened in Macri's Facebook profile: the picture of the march demanding for justice after the mysterious death of a prosecutor last January was shared 21,785 times.  For contextual purposes it is important to add that Massa and Macri are both representatives of political opposition parties.

I have found in my study that "emotions are what makes the mouse go round" for clicking and "liking" Argentine politicians profiles: love, hate, sadness, happiness, anger, that post that makes you laugh or cry are the most popular comments in social media. For instance, Macri laughing with his infant daughter; Massa kissing his wife in Saint Valentine´s Day; President Fernández with the picture of her defunct husband (and former president Nestor Kirchner) commemorating his death anniversary; Scioli watching the Football World Cup with his family, all these have received more posts, likes and retweets than any other where policy measures where communicated.

Another finding is that there is no dialogue among these politicians and their followers.  Although these platforms are promoted as virtual places where online conversation should be taken up with ease and no intermediaries, the only conversation that occurs is among followers. In many cases they debate, but in a majority they have heated altercations.

Moreover, although social media are promoted by Argentine politicians as a place where they can interact with and communicate with their followers without traditional media intermediaries and journalists, this is a strategy that is particularly endorsed by President Fernández. She does not hold press conferences as part of her communication strategy and the use of tweets and other social media content is used as channel to seek for media coverage.