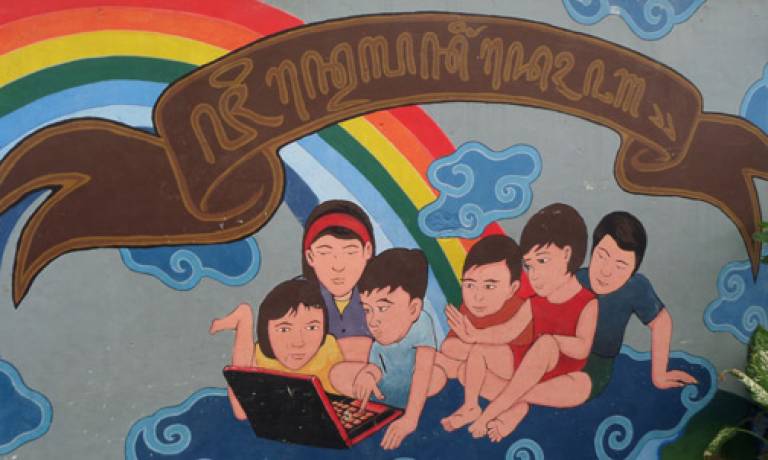 In September 2013 I began systematically collecting data on a small urban neighbourhood in one of Indonesia's "cultural hubs" - the royal city of Yogyakarta in central Java. This is part of a year and a half of anthropological fieldwork meant to unveil the ways in which ordinary Javanese folk make use of the Internet to overcome their economic and cultural marginalization. It is also a project that aims to contribute to the fledgling field of anthropological research on the place of the Internet and new social media in localized (Postill 2008) forms of sociality.

Inconspicuously wedged between the narrow alleyways, known as mouse paths (jalan tikus, I.) of a densely populated upper-lower class neighbourhood in Yogyakarta, Kampoeng Cyber (Cyber Village, I.) is an unusually appropriate place to explore the role of technology in the lives of Javanese Indonesians. This neighbourhood of about 125 individuals claims the title as one of Indonesia's first Internet-saturated communities. Unlike most Indonesians, the majority of Kampoeng Cyber households benefit from inexpensive, high-speed cable Internet made possible by a community-based network sharing system. By sharing the infrastructure required to connect homes, community members have managed to reduce the cost of access to an affordable 4USD per month, a significant reduction for people who mostly make a living from modest home industries.

In an effort to market the neighbourhood as unique and different from adjacent communities that attract tourist traffic with their own gimmicks, Kampoeng Cyber has evolved into a brand. As part of this effort, the elected community leader frequently hosts free public PowerPoint presentations about the community's successful use of the Internet to improve their livelihoods. Murals have been painted around the neighbourhood to showcase the harmony of traditional Javanese values and modern capabilities of social networking and search engines. Journalists and academics regularly visit the site to inquire about the secrets of a humble community that has risen to local fame for its unusual appreciation of the potentials of modern technology.

By living full time in this neighbourhood for an extended period of time, I hope to investigate in some depth the stakes involved in Kampoeng Cyber members portraying themselves as harbingers of technological salvation in an otherwise "primitive" place, as one of my informants put it today.  This blog will document some of my experiences, struggles, and lessons in applying a blended methodology of ethnography, the long-term immersion of the anthropologist in an alternate setting, along with what Robert Kozinets (2010) has called netnography, which involves a similar process of observation and participation in "online" interactions.

These experiences will reflect preliminary findings, which may later be subject to adjustment or change based on new information. They will also foreground personal experiences, questions, and ideas that I expect will be of some help to producing a dissertation and publications in the future, and which in the meantime I hope will fuel discussions and debate about the emerging and established fields of digital anthropology, urban anthropology, and anthropology of media.

More details on my blog at: www.netnographicencounters.com