Following a ballot result announced on Monday 22nd January 2018 where UCU members overwhelmingly backed strike action, UCU announced a series of strikes during February and March 2018 at 61 universities including UCL.  The dispute relates to proposed changes to the USS Pension Scheme which is facing alarming proposals for the future, effectively ending USS as we know it.  Below is a timeline of key dates.

4th April - UCU launches a consultative ballot of members on the UUK proposal which will close at 2pm on Friday 13th April.

12th March - UCU circulates "the agreement reached between UCU and UUK under the auspices of Acas following 6 days of talks" to members.

13th March - UCU's Higher Education Committee and branch representatives meet to consider the contents of the proposed agreement, the hashtag #NoCapitulation trends  on twitter and members take part in a mass lobby at UCU HQ. The union's HEC agree to reject the proposals.

28th March - Delegates from USS branches attenda briefing to provide initial feedback on their responses.  The General Secretary presents 'a letter of clarification' from the Chief Executive of UUK, Alastair Jarvis at the meeting. The higher education committee (HEC) then meet to decide on the further process for consulting members via a ballot. 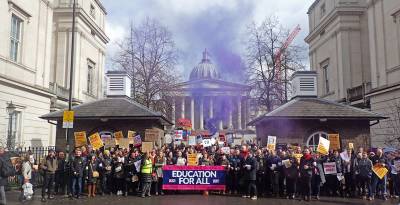 Universities UK (UUK) - the employer's representatives - and the UCU to extend the timetable for negotiations to 23 January 2018 with a view to reaching a negotiated agreement..At a meeting of the USS Joint Negotiating Committee on 23 January 2018 the chair, Sir Andrew Cubie, uses his casting vote to support the UUK proposals.

In a dispute over the future of the USS the UCU's Higher Education Committee (HEC) agrees to launch an industrial action ballot..  The employers propose to close the USS Defined Benefits (DB) scheme to existing and new members and make future payments into a 100% Defined Contribution (DC) scheme. The proposal means that instead of a guaranteed pension income based on your contributions your retirement income would be based on how your individual "investments" perform in the stock market.