An evaluation of the Emirates Mission to Mars, led by researchers from UCL STEaPP, reveals the ways that space missions can generate wider transformative value for society and examines how the UAE has utilised the mission as an inspiration and catalyst for domestic change. 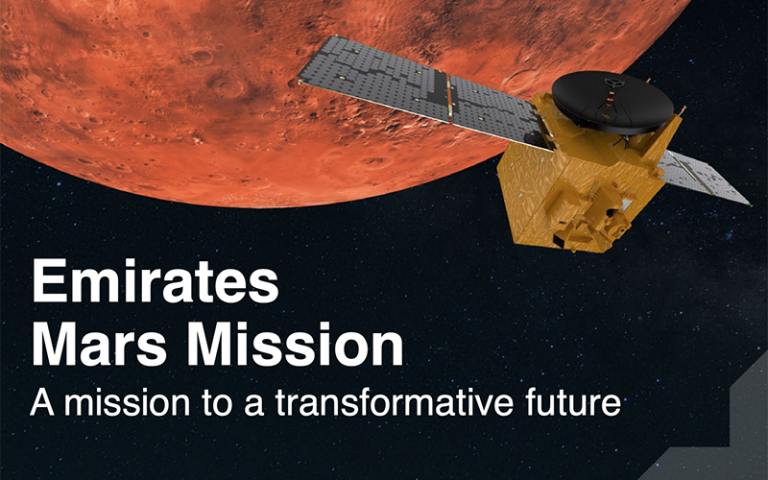 The report, which was jointly launched with the UAE Minister for Advanced Sciences and Mission Project Manager on the 30-day countdown mark, outlines the social and economic impacts of the Emirates Mission to Mars (EMM), and in particular examines whether it is possible to attribute significant national transformation to a single science mission.

The United Arab Emirates is due to launch the Hope (Al Amal) satellite in July 2020 to study the atmosphere and climate of Mars. Using an innovative orbit trajectory and combination of three scientific instruments, the Emirates Mission to Mars (EMM) aims to provide scientists around the world with data to better answer questions on the climate and weather systems of Mars and to understand the inner workings of other planetary atmospheres, including Earth’s.

The motivations behind the launch of the EMM have differed from those typically seen in outer space missions. Rather than starting with a question for science, the EMM primary focus was on the UAE’s broader national objectives. The UAE is currently following a number of initiatives to diversify the economy from traditional activity such as oil and finance. For this it seeks to rapidly develop its domestic scientific and technological capabilities in the near-term, and inspire younger generations to follow future careers in science and entrepreneurship.

Previous studies on the value of deep space missions have predominantly focused on economic benefits and there have been very few comprehensive analyses of deep space exploration missions. In order to fully capture the broader, societal benefits of the EMM, the researchers, led by Dr Ine Steenmans, developed a new method to capture a broader impact spectrum of science missions, the Transformative Value Canvas.

The Transformative Value Canvas creates a new toolkit for evaluating the impact of space missions using a diverse range of impact measures across a number of different sectors. For the EMM, impact spanned across domains such as developments in scientific capacity, changes benefiting the UAE and international space economies, the UAE’s wider national development, and its changing global opportunities. The Canvas outlines 16 types of impact, which were identified by the researchers from previous space impact studies as well as national transformation initiative evaluations. They include, know-how; aspiration and identity; technology advances; prestige and reputation; new employment types; diplomacy and security; and investment and revenue.

Using their revised impact evaluation approach, the team found that the Emirates Mission to Mars is already generating national transformative value for the UAE by impacting the UAE’s space science capacities, its space economy, national development, and global engagement capacities. For example, the UCL study found that evidence that the mission has positively changed the UAE’s reputation within the international space community and has led to a step-change in domestic aerospace manufacturing capacities, including the first large clean room for space activities in the UAE.

Crucially according to the researchers, the mission’s outreach and engagement programmes are noticeably changing perceptions about the attractiveness of science careers and has catalysed the creation of new degree programmes at five UAE universities. It has also led to the development of a UAE ‘Research Experience for Undergraduates’ programme, which has so far seen young engineers and scientists take part in 15 international research placements with reputable space scientists.

This UAE mission to Mars not only challenges ideas about the value of space exploration. Together with UCL, it has also challenged and revised the methodological toolkit that others can use to ask similar questions about that value. From the very first meeting, the degree to which the mission team prioritised knowledge transfer and capacity development was apparent. By supporting our advocacy for an approach combining traditional capture of impact evidence with analysis of underlying mechanism of change, the mission team have made it easier of others to share in their learning about fast and transformative science policy development.

The outcomes already observed from the Emirates Mission to Mars suggest that the programme could offer useful lessons not only for those involved in space exploration, but also for policy leaders interested in the ways that science missions generate transformative value for society.