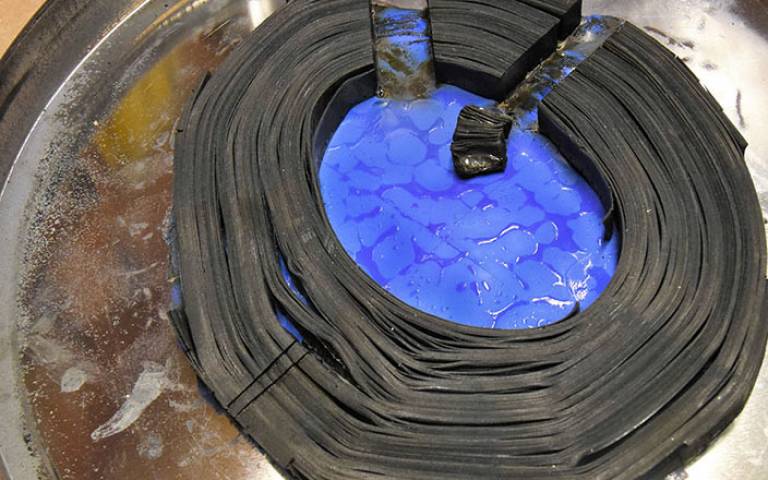 SEAHA student Ida Ahmad has recently published her research “Are we overestimating the permanence of cellulose triacetate cinematographic films? A mathematical model for the vinegar syndrome” in Elsevier journal Polymer Degradation and Stability.

It was first observed that CTA films stored in warmer environments after some time started to emit a vinegar-like odour. Thereafter, the afflicted films began to show other signs of damage such as embrittlement, shrinkage, channelling and the appearance of crystals or bubbles on the surface. CTA films often appeared stable for long periods of time, before the initiation of what came to be known as the “vinegar syndrome.”

The vinegar odour is caused by the emission of acetic acid from the CTA base of the film, which is produced when moisture reacts with the CTA molecule. The progress of this reaction can be measured by the free acidity of the film, defined as the millilitres of 0.1 M sodium hydroxide required to neutralise 1 gram of film base. Film conservation guidelines recommend that a free acidity of 0.5 is considered the point at which the vinegar syndrome starts. After this point, the reaction rate appears to increase markedly, along with other visible signs of degradation.

The reason that the reaction rate accelerates is because acetic acid catalyses the reaction which produces it. This is known as autocatalysis. It is believed that the acid is also responsible for catalysing processes which result in further symptoms of degradation. Heat and moisture promote this reaction, as well as poor ventilation, as this prevents acetic acid from offgasing and so enhances the effect of autocatalysis.

Previous research has attempted to predict the time until onset of the vinegar syndrome, or permanence, of CTA films as a function of temperature and relative humidity. These models assume that all the acid is retained in the film, but they do not account for autocatalysis, as it was believed that the effect of this was not important before the onset of the vinegar syndrome.

Ida developed a mathematical model which accounts for autocatalysis at all levels of acidity. The kinetic parameters for the model were obtained by fitting to published experimental data of artificial ageing of CTA film. The model predictions were validated against a different set of published experimental data at lower temperature conditions. A good agreement was found between the predictions and the data.

Using the model, Ida made predictions for film permanence at a range of temperatures and relative humidity typically found in archives. These were compared against the predicted film permanence according the film conservation guidelines, which do not account for autocatalysis prior to the onset of the vinegar syndrome. This showed that the guidelines may be overestimating the permanence of CTA films. Significantly, based on the age of most CTA films, the model predicts that there are film collections today or very soon which are at risk of developing the vinegar syndrome much sooner than may be anticipated by conservators if they are following the guidelines.

Ida Ahmad is a SEAHA PhD student based at the Institute for Sustainable Heritage at University College London. Her research, partnered with Tate and Process Systems Enterprise, uses mathematical models to predict how plastic artefacts in museum collections degrade over time.

Find out more about Ida's research