Research by SEAHA student Yujia Luo finds that Xuan papers have similar properties to other papers and earn the reputation of being the ‘paper king lasting over a thousand years’. 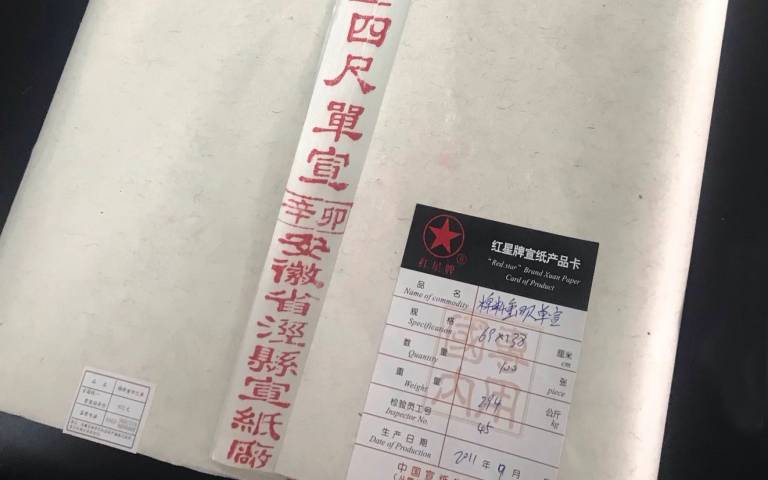 Xuan paper is a traditional Chinese handmade paper commonly used in Chinese art and for conservation of Xuan paper-based artefacts, which has the reputation of being the ‘paper king lasting over a thousand years’. Yet up until now there has been limited systematic scientific research into Xuan paper, and in particular, we know little about its material properties or degradation behaviours. Yujia Luo, based at UCL Institute of Sustainable Heritage, and co-authors sought to address this.

A series of conventional methods in the field of paper research were used to characterize contemporary unsized Xuan paper provided by Sichuan Museum in China, such as fibre identification, determination of paper pH and degree of polymerisation, elemental analysis and degradation experiments.

Luo’s analysis showed that fibres of blue sandalwood and rice straw were used as main raw materials as claimed by the manufacturers, where blue sandalwood could also be replaced by other fibres such as paper mulberry and bast fibres. Calcium and silicon were dominant elements in the samples, and interestingly the calcium was associated with contents of both ash and alkaline reserve. Most papers were neutral or mildly alkaline containing proper alkaline reserve, indicating good degradation stability.

To explore Xuan paper’s durability, Luo then performed accelerated degradation at two sets of environmental conditions. It was found that estimated degradation rates agreed with the Collections Demography model of paper degradation, meaning that from a material perspective degradation of Xuan papers proceeds in the same way as other types of paper.

The research was carried out in collaboration with the Sichuan Museum.