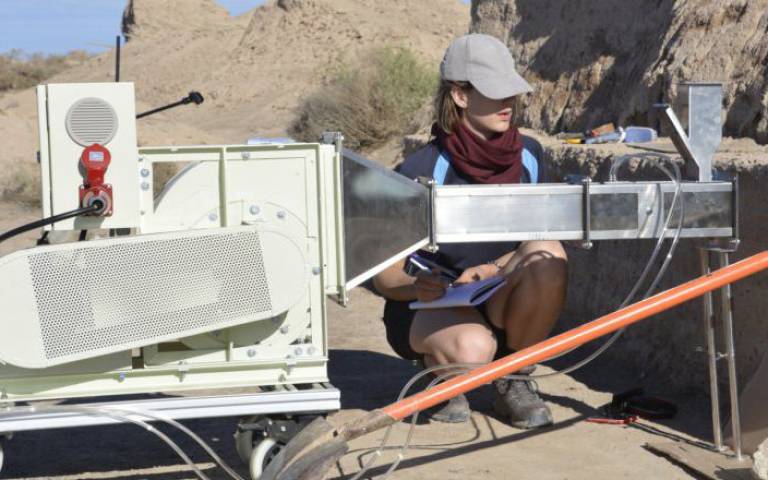 Oxford-based SEAHA student Jennifer Richards has recently published her research ‘a controlled field experiment to investigate the deterioration of earthen heritage by wind and rain’ in Springer Heritage Science.

Earthen heritage is one of the oldest and most universal forms of heritage with sites dating back to the Neolithic and being found of every continent. Earthen sites also make up 10% of the World Heritage List but are over represented on the World Heritage in Danger list in part due to the extensive deterioration occurring at the sites which threatens to reduce their value.

Wind driven rain, wind and sediment laden wind (wind which is transporting sediment) all drive the deterioration of earthen heritage with rain noted as causing the greatest rate of deterioration over short periods.

This research used a test wall built out of rammed earth to the East of the historic walls at Suoyang. The test wall was subjected the wall to low, medium and high intensities of wind, sediment laden wind and rain and laser scanning was used to assess the extent of the deterioration caused by each test run.

The deterioration features caused by each environmental force were notably different and could be mapped onto the historic walls. Clean wind caused the least deterioration and only removed loose material from protruding areas of the wall, while sediment-laden wind caused pitting (small concave features in the wall surface). Wind-driven rain caused the greatest deterioration with the formation of incipient gullies down the wall face. However, the low frequency of rainfall at Suoyang is likely to limit the extent to which rainfall can cause deterioration at the site, whereas the almost continual nature of erosive wind events suggests that wind may play an important role in causing deterioration even though it only has a low magnitude impact.

Further research is needed to understand how climate change will affect the environmental forces operating at Suoyang as increases in the frequency of rainfall or the speed of the wind could result in faster rates of earthen heritage deterioration. These findings show that conservation strategies at earthen sites like Suoyang need to address the impact of multiple environmental forces, such as clean wind, sediment laden wind and wind-driven rain.

Jenny Richards is a SEAHA DPhil student based at the School of Geography and the Environment at the University of Oxford. Her research, partnered with The Getty and Dunhuang Academy, evaluates site-based conservation approaches to mitigating climatic risks to earthen heritage sites in N W China.

Find out more about Jenny's research