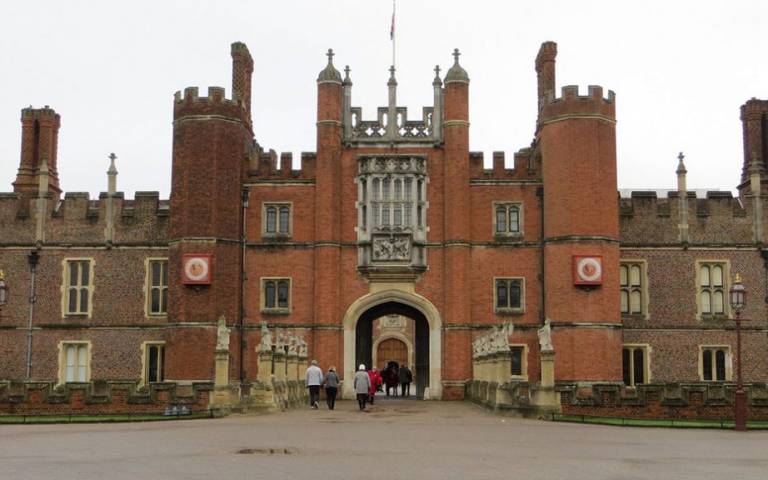 UCL ISH student Nanette Kissi and SEAHA supervisor Dr Katherine Curran have published research in the journal Heritage Science studying whether Near Infrared (NIR) spectroscopy can be used to understand chemical changes in historic wool fibres from Tudor tapestries. The research was done in collaboration with Historic Royal Palaces, a SEAHA partner.

The tapestries at Hampton Court Palace were a magnificent demonstration of the Tudors’ power and prestige and are now valued as works of art and for the way in which they illuminate this fascinating period of history. The tapestries are primarily composed of wool fibres, which act both as aesthetic and structural elements. Over the centuries they have been exposed to environmental conditions such as daylight, dust and fluctuating temperature and relative humidity that can lead to chemical changes in the fibres which weaken them.

This work aimed to explore whether NIR spectroscopy could be used as a non-invasive tool to study the chemical degradation of historic wool fibres. Using Fourier Transform Infrared (FTIR) spectroscopy, evidence of changes such as the oxidation of cysteine residues in the wool proteins could be identified. However, it is very difficult to use FTIR directly on tapestries, as destructive sampling is often needed to obtain useful results. NIR spectroscopy is a promising tool for the non-invasive analysis of real historic objects as it only requires contact between the object and the fibre optic cable of the spectrometer. NIR spectroscopy has been used in the past at the UCL Institute for Sustainable Heritage as a tool for the determination of paper properties such as pH.

In this work, 180 yarns from historic tapestry fragments provided by Historic Royal Palaces were analysed using FTIR spectroscopy and evidence of oxidation was assessed. NIR analysis of these fragments had already taken place as part of previous research at the UCL Institute for Sustainable Heritage. A Partial Least Squares model was then built to see to what extent the chemical information found in the FTIR spectrum could be predicted from the NIR analysis.
The model was found to have a reasonable level of accuracy when tested with a validation set of historic tapestry fragments. However, translating the model to the analysis of a tapestry in-situ at Hampton Court Palace proved more challenging. The research provides a promising tool that conservators could use to identify chemically degraded wool fibres before damage becomes visible and provides some suggestions for improving the on-site analysis.