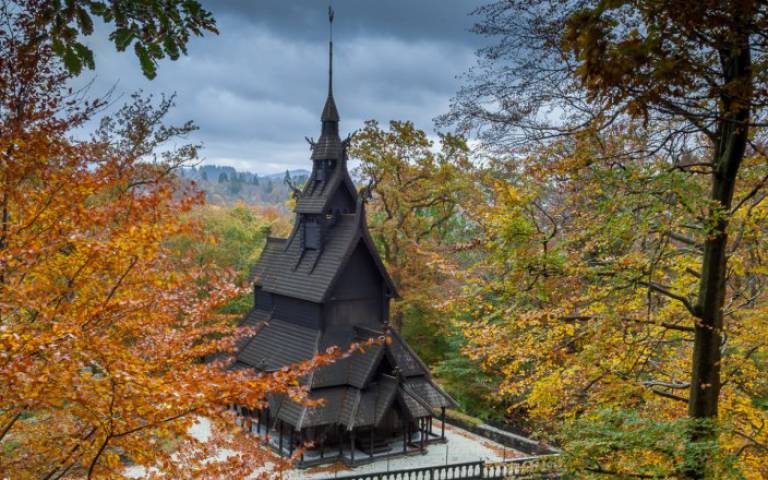 On a snowy 28th February, the SEAHA Built Heritage Initiative welcomed Sjur Mehlum to give the group’s first public lecture at Historic England’s offices in central London. The SEAHA Built Heritage Initiative is student run group whose members are SEAHA students who are interested in or work with built heritage.  Members of the SEAHA CDT and the public who braved the weather were rewarded with a fascinating lecture on Stave Churches, craftsmanship and the challenges faced with conservation work.

Sjur is the Senior Advisor for the Norwegian Directorate for Cultural Heritage and was responsible for the Stave Church Programme which restored all 28 remaining Stave Churches in Norway between 2001 and 2015. He clearly explained how Stave Churches were constructed and showed us photos and diagrams of churches which date back to the 1100’s. He also argued that these churches are as, or even more, important to Norwegian culture as the Viking boats, as carvings on the churches also dating back to 1120 AD.  Sjur then explained two contrasting repair processes at two different churches emphasising the importance of including craftsman at all stages of both projects. It was brilliant to see conservation work in action but also to get an honest account of the decision-making processes which acknowledged that it is impossible to meet idealised standards throughout complex conservation projects.

The lecture provided insight into a different type of construction, which many knew nothing about and also into the challenges of conserving wood-built heritage.

After the lecture we were taken on a tour of the Historic England offices and got to look out over a snow covered London from their Thames-side roof top garden.

The SEAHA Built Heritage Initiative group would also like to thank Sjur for attending their meeting before the lecture, Historic England for hosting us and the EPSRC SEAHA Centre of Doctoral Training for their financial support.