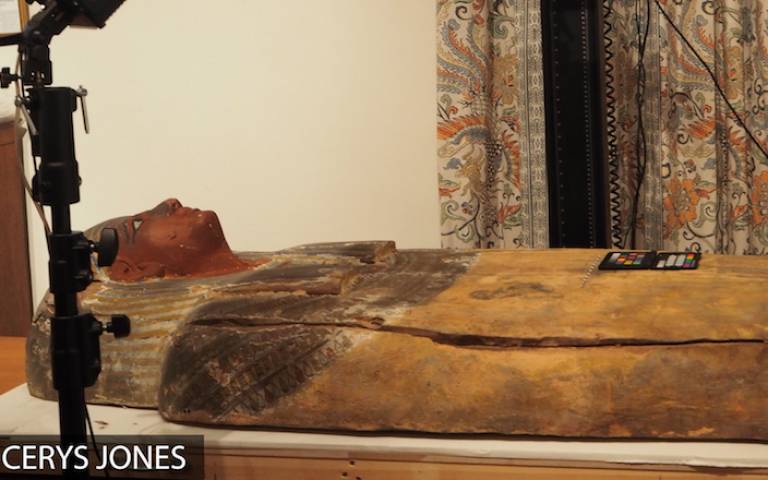 SEAHA student Cerys Jones appeared on the BBC News on New Years Eve along with Professor Adam Gibson and Dr Kathryn Piquette. Two projects involving multispectral imaging of Ancient Egyptian artefacts were featured. One such project involved the multispectral imaging of the Egyptian coffin lid at Chiddingstone Castle (read more about this below), in which the hieroglyphs stating the name ‘Irethorru’ were recovered. The Deep Imaging Project, led by Professor Adam Gibson and Professor Melissa Terras and funded by the Arcadia Fund, was also featured. This project sought a non-destructive solution to identify whether text was present in the hidden layers in Egyptian cartonnage. The multispectral imaging system, provided by SEAHA industrial partner R.B. Toth Associates, illuminates in 12 different wavelengths from ultraviolet through to the infrared, and using a range of filters, enabled the recovery of the hieroglyphs and hidden inks. In the Deep Imaging Project, sample test papyrus sheets and cartonnage from the Petrie Museum were imaged.