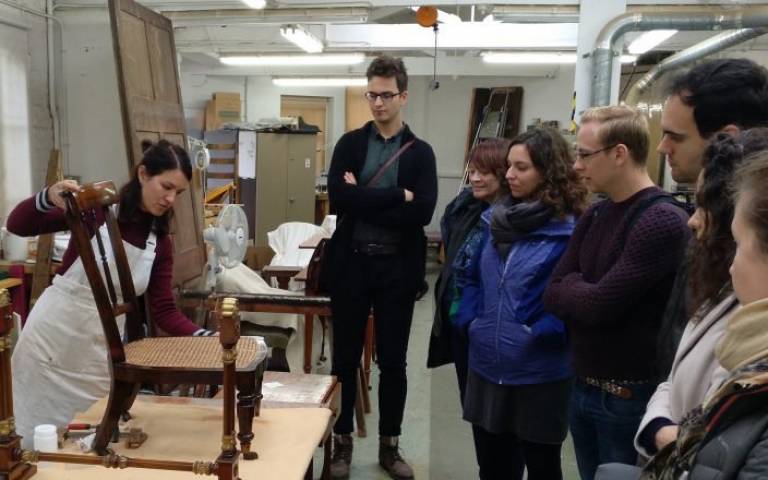 On 10th October, the SEAHA Mobile Heritage Lab (MHL) visited the grounds of Windsor Castle as part of a cohort exchange of knowledge day in which the students were allowed access to the Conservation Studios at the castle. During the morning, the group divided into four small parties and were given access to expert advice from the highly specialised conservators in several studios, including painting and paper conservation, book binding, furniture and upholstery, gilding, and collection care in situ. The book binding and paper conservation group were given a glimpse of some of the more delicate conservation projects, including a Victorian pressed botanical study, and folios from the Padshahnama, a 17th Century imperial Mughal manuscript. The highlight of the morning tour was seeing a Michelangelo drawing “ A Children’s Bacchanal”, as it is in the process of being treated and mounted before display. In the afternoon, the Castle conservation staff visited the MHL in return for their time, and were given a tour of the facilities and processes of investigation available in the lab. As a case study, Richard Grove demonstrated a recent research project comprising part of a SEAHA venture which includes the University of Oxford and the Getty Conservation Institute. Richard’s work involves the artificial weathering of Sandstone, and employs the repeated application of high temperature to change the characteristics of new stone in order to mimic those of degraded historic material. The purpose of this research is to provide useful material for the testing of remedial treatments and applications used in the preservation of a vulnerable and globally utilised material.

During the tour of the lab, Richard demonstrated the methods used to assess the characteristics of the samples, including a Punditlab Ultrasound (P-Wave) meter, which measures internal structural integrity of stonework using the same technology used to detect earthquakes in high risk zones. In a bizarre example of cross disciplinary practice, one of the Windsor Conservation team immediately recognised the P Wave equipment from a former role of his where they used the same equipment to test the structural integrity, or “dunk-ability” of biscuits for a well-known food manufacturer! 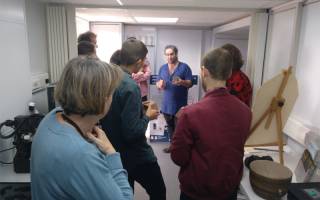 In addition to this, Richard demonstrated a new technique developed in his project to map changes in surface consolidation using the Schmidt rock hammer, capturing data in a grid format in order to identify and track changes across the surface of historic stone surfaces. Possible applications of this technique were discussed, with a range of fragile stonework across the Royal estate, and interest in this project was high.