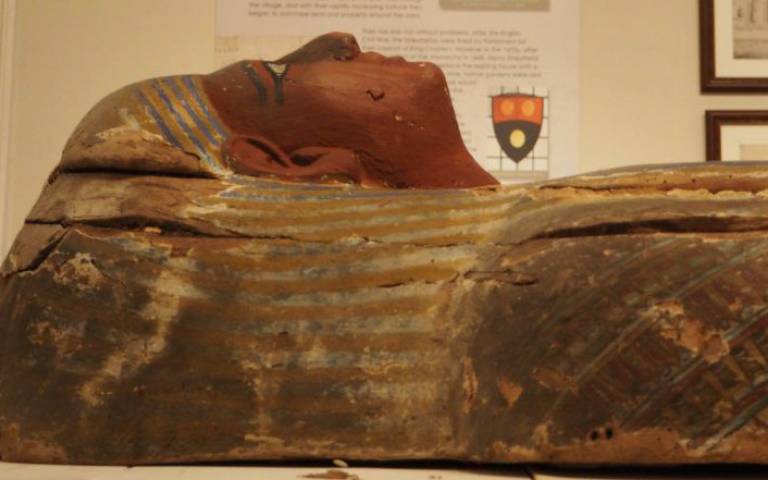 A 3000 year old Egyptian coffin lid on display at Chiddingstone Castle in Kent has been imaged using a multispectral imaging system in the hope to recover the hieroglyphs indicating the person’s name. Maria Esain, the collections manager at Chiddingstone Castle, said “There is a saying from Ancient Egyptian times that goes: To speak a man’s name is to restore him to eternal life.  Therefore, if we were able to determine the name written in hieroglyphs on the ‘foot’ of the coffin then we would be enabling him/her to live forever.”

Chiddingstone Castle enlisted Dr Kathryn Piquette, an Egyptologist and Imaging Specialist at UCL Advanced Imaging Consultants, and Cerys Jones, a PhD candidate in UCL Medical Physics and Biomedical Engineering department whose research involves imaging applied to heritage, to carry out the imaging and processing of the coffin lid. Knowing that the pigment Egyptian blue fluoresces infrared light when illuminated in the visible, Cerys recommended illuminating the artefact in red light and using the infrared longpass filter to allow only wavelengths in the infrared region to reach the camera sensor. The team were thrilled that this successfully resulted in the appearance of the hieroglyphs and, after consulting with other experts in the USA, Dr Piquette revealed that the name on the coffin lid was Irethoreru (Iret-hor-er-u), meaning “The eye of Horus is against them”.

The area beneath the pectoral (the jewellery worn by wealthy Egyptians) was also imaged using 18 distinct combinations of wavelengths and filters. These images were then processed using principal component analysis and revealed two seated figures, possibly goddesses, on either side of the central inscription. Further hieroglyphs contributing to the offering on the central column were also identified using the technique.

The coffin lid can be seen on display at Chiddingstone Castle. 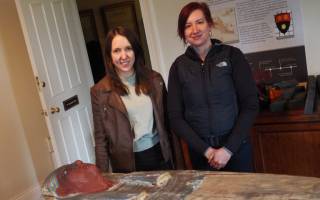