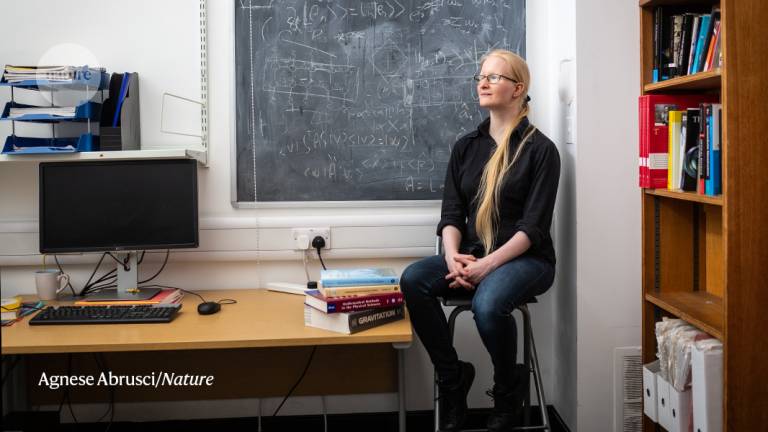 Former EPSPRC Centre for Doctoral Training in Delivering Quantum Technologies student and UCL post-doctoral researcher Dr Sofia Qvarfort has been photographed for Nature magazine’s Where I Work feature. After finishing her PhD and a short research post at UCL, Qvarfort is now a Marie Skłodowska-Curie Actions Research Fellow at Stockholm University and a Wallenberg Initiative on Networks and Quantum Information Research Fellow at Nordita, Stockholm.

Qvarfort writes In Nature: “Theoretical-physics concepts can be hard for anyone to visualize. As a person with albinism, a genetic condition that impairs vision, I face particular challenges. In this picture, taken in June at my former office at University College London, I’m sitting in front of a blackboard filled with mathematical equations describing quantum states. I had to put my face right in front of the chalkboard to make any sense of the scribbles.”

Qvarfort’s research looks at the fundamental questions of quantum science. In 2020 she co-authored a paper showing for the first time equations that show that electrons and protons in hydrogen atoms are entangled at a quantum level (S. Qvarfort et al. New J. Phys. 22, 093062; 2020).