Why a different conference format is needed for an online world. 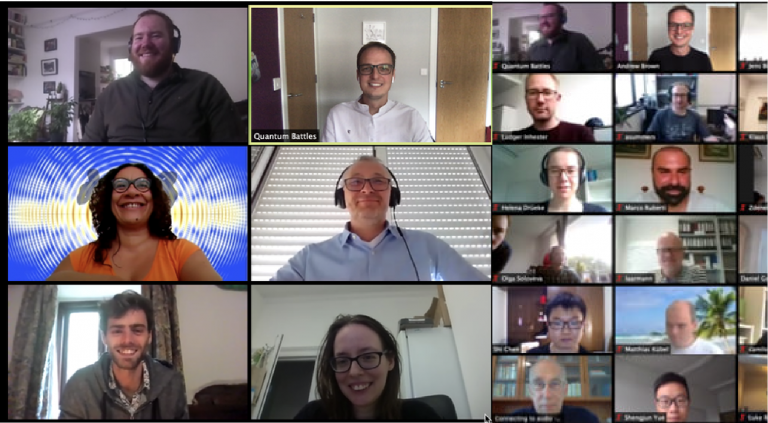 “What I usually see at conferences is that there’s the equivalent of street fights, that groups with different views and different perspectives just attack each other without much co-ordination and without much respect.”

These fiery remarks come from Carla Figueira de Morisson Faria, a professor of physics at UCL. She is narrating a promotional video for a new type of academic conference titled: Quantum Battles in Attoscience.

Attoscience deals with processes that happen within some of the shortest times in nature (10-18 s) - that’s one over a billion times a billionth of a second!

“You are dealing with the physics of the extreme,” said Faria, “extreme fields because you need to subject matter to a very intense laser field and we’re talking about extreme time scales, because all the phenomena that happen when you subject matter to this kind of light, they happen within a fraction of a cycle of this field.”

At these time scales, researchers can image the real-time movements of electrons. This is important as electrons carry energy in a myriad of >>        systems (from simple molecules to complex solids). Understanding and controlling electron dynamics at this level, in time, may lead to optoelectronic computers with switching rates 100,000 times higher than existing digital electronic systems.

In Physics World’s October 2020 issue, Faria and co-organiser Dr Andrew Brown (Queen’s University, Belfast) wrote: “Despite – or perhaps because of – its vibrance, the attoscience community is very divided on almost all issues, siloed into factions without a co-ordinated effort toward constructive debate. We have seen plenty of ‘street fights’ at major international conferences and in journals, with not much respect being held between the different parties. The idea of embracing, instead of avoiding, conflict emerged when we were writing a workshop proposal. Privately, some of us had practised martial arts, where rigorous codes of conduct are enforced. Breaking them will result in you being expelled for tarnishing your school’s reputation. In extreme cases, you may even have your belts revoked. This is a very different approach to conflict in street fights, so we asked: If people want to fight, why not go for the scientific equivalent of a martial-arts tournament?”

The COVID-19 pandemic has seen scientists shift from working and collaborating in-person to conducting their research and conferences online using tools such as Zoom. This move has led some to warn of the long-term dangers for science. In the July issue of Physics World, science sociologist Harry Collins from the University of Cardiff along with two physicists Bill Barnes (Exeter University) and Riccardo Sapienza (Imperial College London) warned against a outright shift to virtual workshops and conferences especially in fields which there is “much disagreement and passion”. Face-to-face meetings, they contend, are the “only way to propel science forward”.

Faria and her team disagree. Initially they had planned to host their first “battle” in July 2020 at University College London, but they delayed the on-site event and developed an online experience for Summer 2020.

UCLQ fellow and co-organiser Dr Andy Maxwell said: “Mirroring sport, we started to call our online version a ‘warm-up’ in preparation for the on-site event, but soon we learned that the ‘warm-up’ was just as valid and was in some ways more aligned with the communication you can have online.”

Held in early July 2020, over three days, the Quantum Battles in Attoscience event had more than 300 registered participants from 34 countries. Moving online posed several challenges for the organisers, but also offered up the chance to test the new debating format and martial-art style code of conduct developed especially for the battles.

“We invited early-career researchers – who we dubbed ‘combatants’ – from opposing groups to participate in three ‘battles’ on contentious topics,” said Maxwell. The organisers promoted combatants on the workshop website and on social-media platforms leading up to the conference, sharing short video presentations and twitter posters to increase interest and excitement for the event.

Dr Bridgette Cooper, a quantum chemist and co-organiser of the battles said, “Our conference format focussed on giving early career researchers a lot more exposure than normal conferences allow.” Each of the combatants also became co-organisers of the conference investing an enormous amount to the planning of the battles. This excitement was then passed onto their groups. “We used tools like Slack and ZOOM to bring all these people together and once arguments had been agreed and prepared, we held several mock battles.” Cooper and Maxwell said that this gave early-career researchers the ability to learn, explore controversial points, and allowed them to let go of their impostor syndrome.

Quantum Battles still boasted big names but they were invited to chair battles and give more traditional talks. By focusing on early-career researchers the organisers felt that they could avoid a lot of politics and ego.

The organisers of the battles wanted to change the paradigm of scientific conferences. They especially wanted to make a break away from encouraging the participation of principal investigators, as Faria and Brown write in Physics World: “Why do we need the same lectures every year from the same people?” However, they admit that this desire for fresh faces has drawbacks: advertising a conference with no big names may not attract interest.

Feedback from their conference showed that the move away from hour-long power-point presentations by single speakers made for a more interactive and simulating online experience. They demonstrated that an alternative is possible and that debate can happen in an online forum and it can be done while maintaining respect for those involved.

Find out more about Quantum Battles in Attoscience or to register for the next battle.