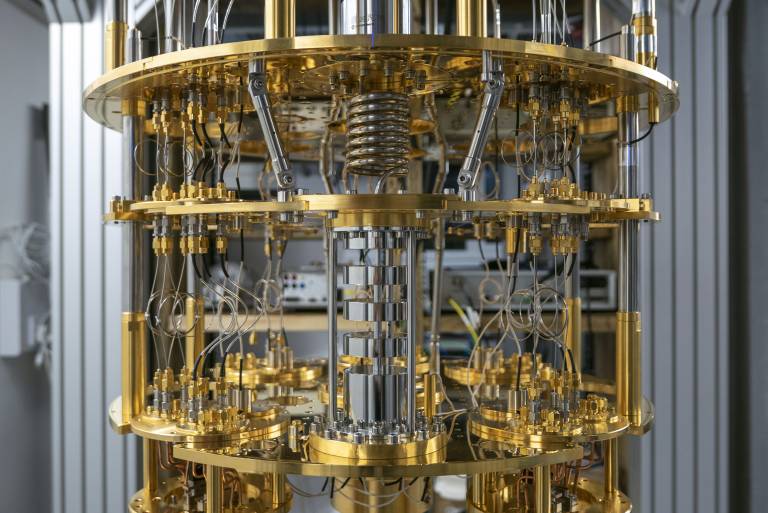 Circuits of superconducting qubits have proved to be one of the promising platforms for quantum computing, with companies such as Google, IBM and D-Wave pursuing this approach. However, it is still unknown how to best design superconducting quantum circuits for the manipulation of quantum information.

However, for quantum computation we are only really interested in the dynamics of the qubits in the circuit, not the dynamics of the full circuit. The effective qubit Hamiltonian is useful because: it contains all the necessary information to describe the dynamical evolution of the qubit system; it is much more compact; and knowing it can help designers to engineer superconducting qubit circuits.

Reducing the full circuit Hamilton to an effective Hamiltonian is not a standardised mathematical procedure. Gioele Consani wanted to do some numerical simulations with the effective Hamiltonians for the quantum computing systems he was studying, but he said, “In the literature there isn’t a unified way to do this, and lots of people have different methods or different approaches. This is especially true for systems with interacting qubits.”

While the mathematics behind superconducting circuits - quantum network theory - is well established, it is missing an agreed and consistent way of reducing the circuit Hamiltonian to the effective qubit Hamiltonian. Consani added: “The current numerical methods that exist are sometimes based on restrictive assumptions and are not guaranteed to reproduce the correct effective Hamiltonians.”

‘Our novel approach – which we call the local basis reduction method - is based on more general assumptions than other Hamiltonian reduction methods in the literature,’ write Consani and Warburton. This approach does not require any ad hoc assumptions on the structure of the Hamiltonian, such as its response to the electric and magnetic fields applied to the circuit, making it more accurate in producing an effective Hamiltonian in the case of isolated superconducting qubits.

Consani said, “In terms of computational cost, it’s very comparable to the standard approaches, but in our opinion, it gives more accurate results in a wider range of physical parameters.”

Their new method cannot be applied to systems with large numbers of qubits, but Consani said, “This is not too restrictive, because you can think of large systems being made of many primitive elements. You can isolate a pair of qubits and then build your full system by just repeating the same primitive element.”

This reduction method will prove useful in different areas of applied quantum computation, where complex systems of continuous variable circuits are described in terms of interacting two-level systems. Also, in the context of circuit design their method can be used to model the interplay between different qubit Hamiltonian terms.