Researchers at UCL have proposed a new method for measuring the gravitational acceleration with a sensitivity that can in principle surpass the standard set by atomic interferometry.

A new method that uses quantum optomechanical systems to measure gravity has been has been proposed by scientists at University College London, UK. They investigate the fundamental sensitivity for gravitational accelerometry of a cavity optomechanical system exploiting a light-matter interaction.

The practise of measuring the gravitational acceleration g – also known as gravimetry – has led to important advances in both fundamental science and industry. For example, local variations of g around the Earth have been mapped with satellites to construct global tidal models to aid climate change research, whereas in industry, precision accelerometry has been extensively used in inertial navigation technologies and for conducting geological surveys.

While classical systems have long been utilised to perform accurate measurements of g, the broader topic of using quantum systems to probe relativistic phenomena is currently being pursued with great interest because quantum systems offer several useful advantages, including reduced noise levels, a compact realisation and most importantly an increased measurement sensitivity achieved through the power of coherence and interferometry. A key advantage to using quantum systems for metrology purposes are their interferometric properties and how they can be used to enhance the measurement sensitivity. 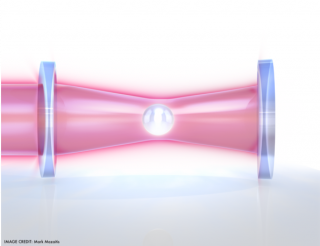 The team modelled a quantum system in the form of a mechanical oscillator in an optical cavity, i.e. a quantum optomechanical system, and found that it exhibited several desirable properties: it is impervious to initial thermal noise, requires only the light to be measured and has the potential to achieve very high measurement sensitivities.

"We decided to investigate the ensuing fundamental limits on the measurement sensitivity of gravimetry in the quantum regime of optomechanics – explains PhD student Sofia Qvarfort - and we obtained some striking results!"

The proposed experiment involved using a laser to trap a small quantum object, such as a nanodiamond or a microscopic mirror, which allows the performance of very accurate measurements of forces that affected the system, such as gravity. The team looked at the mathematical description of the system and worked out exactly how well they should be able to measure gravitational acceleration by using optomechanical system. The researchers found that optomechanical systems were very suitable for the task – and provedthat it is possible, in principle, that they could outperform the atom interferometers, which are some of the oldest and most well-developed quantum systems used for metrology.

"It was key to realise that feasible, and routinely implemented, detection schemes, would be optimal to assess the impact of gravity," explains Alessio Serafini while Sougato Bose remarks that: “A very interesting aspect of this work is that it exploits the quantum entanglement of the light and matter to make gravimetry insensitive to the thermal noise, which is a major limitation of classical gravimeters." Bose and his colleagues reported their results this week in Nature Communications.

The team hopes that the paper can be useful to both the theoretical and experimental scientific community and it can serve many industrial applications of precise measurements of gravitational acceleration, such as exploratory space missions, fundamental investigations into the nature of gravity, climate change research and geological surveys.