My Summer Work Experience at UCLQ

Tom McCarthy is a zealous 18 year old from Mayo, Ireland. Over the summer he spent six weeks on work experience in Professor John Morton’s Quantum Spin Dynamics group at UCLQ. 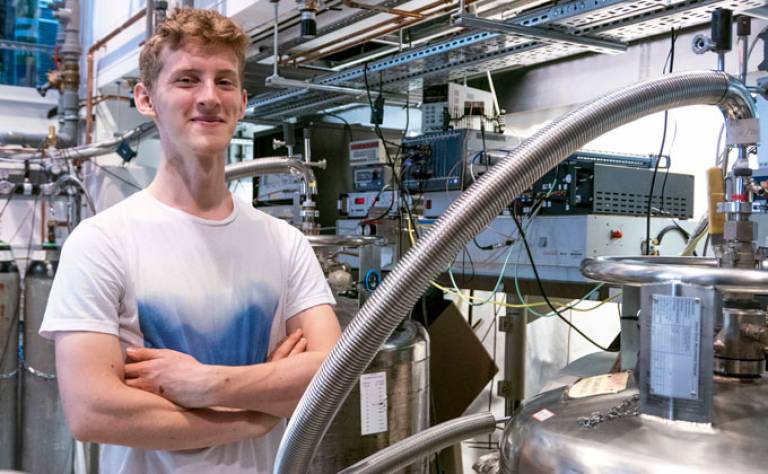 I have always been interested in Physics. Last November, a friend mentioned quantum computers to me, prompting me to research them and I was instantly fascinated by these new devices!

They are a new type of computer which will soon be able to solve more complex problems than traditional computers can tackle. Many scientists strongly believe that quantum computers will one day revolutionize chemistry and materials science; giving us the ability to predict specific properties of molecules and materials.

Everything started last year, when my younger sister and I visited London. She wanted to do some sightseeing, but I was eager to see a quantum computing lab. We came to a compromise - I got to visit one lab and then she led the way for the rest of the day. Win-win!

Before the trip, I emailed a number of prominent professors who run quantum computing labs in London. I explained who I was, I told them about my nuclear fusion reactor project and asked about doing some summer work experience in their lab. Professor John Morton, from UCL, invited me to meet him at the Quantum Science and Technology Institute. I soon found myself sitting in his office, talking about quantum computers with a leader in the field, and couldn’t have been happier!

Fast forward to last July and I was boarding a plane to London Stansted. Prof. Morton had considered my request and generously took me on as summer student.

I wanted to learn about quantum computers and felt that, there could be no better way to spend some time in a quantum computing research group. Further, doing it at UCL, an internationally renowned university, seemed like an incredible opportunity. Along with indulging my interest in quantum computers, I would get to see what physics research was really like, how scientists develop new ideas and work in a team. Plus, coming from one of the wettest parts of Ireland, a summer in London sounded pretty good.

By the time I started, the new lab was ready: seeing it for the first time was stunning, in front of me there was a shiny, golden, brand new dilution refrigerator. Over the last nine months I'd seen these in numerous videos and articles, and now I was going to work with one.

Before starting, I didn't know what to expect from an academic setting - would things happen fast or slow, how would the group dynamic work? I've had some experience in start-up companies and I was very curious to see how academic research would compare - would it be somewhere I could see myself working, which one would I prefer?

Something I correctly anticipated it was the almost constant discussion about physics and quantum computers, which was just brilliant. This was often with my fellow summer students, Harriet and Ayham, whom I learned a lot from. One misconception I had was that industry was the area of longer working hours. Wrong! The researchers I got to work with, were often in the lab until late and worked really hard! For me, this was encouraging. I’d like to work with people who really love what they do. In fairness, this may not be everybody’s ideal working arrangement, but it’s the one that appeals to me!

When I arrived, the equipment had recently been moved into the new space so we spent a lot of time moving and installing heavy, bulky equipment. I was getting an authentic experimental physics experience… All of the work was accompanied by explanations though, about how the equipment worked and how it would be used. Within two weeks from the lab opening, many experiments were already running: a remarkably quick turnaround according to Prof. Morton!

The highlight of my time at the Quantum Science and Technology Institute was to be able to run an experiment by myself: the experiment used microwave signals and computer code to test one of the devices in the dilution refrigerator. Sofia Patomäki, a PhD student, explained what she wanted the equipment to do and then let me figure out how to do it. By that afternoon I had a functioning program! After Sofia put the finishing touches to it we ran it and I looked forward to seeing the results. Dr Michael Fogarty, a postdoc in the group, gave me some more insight into the theory behind the experiment.

Shadowing PhD students and postdocs in the lab taught me a lot. I watched their work closely and asked plenty of questions, which they always answered graciously. Learning about electron spin resonance, atomic force microscopes and quantum error correction in this way was very fascinating, but there was something especially exciting about programming and running an experiment myself.

Aside from the physics that I learnt from them, my time in the group gave me valuable insight into the world of research and academia. It was a truly enjoyable experience and it will affect many of my decisions over the coming years. Prof. Morton gave me an amazing opportunity without knowing me too well, he only saw my enthusiasm and passion and that's also what I found in his group: Sofia, Michael, Harriet, Ayham and all the other team's members made my experience at UCL a very special time and they showed me a world that I look forward to joining one day.