A mathematical problem underlying fundamental questions in particle physics and quantum physics is provably unsolvable, according to scientists at UCL, Universidad Complutense de Madrid – ICMAT and Technische Universität München. The findings show that even a perfect and complete description of the microscopic properties of a material is not enough to predict its macroscopic behaviour.

The study, published today in Nature, investigated the problem of the ‘spectral gap’ – the energy needed for a material to transfer from its lowest-energy state to an excited state. When this energy becomes very small (i.e. the ‘spectral gap closes’), it becomes possible for the material to transition to a completely different state and the properties of the material can undergo dramatic changes. For example, when a material at a very low temperature transitions from insulating to superconducting, this dramatic change is the result of its spectral gap closing.

Using sophisticated mathematics, the authors proved that even with a complete microscopic description of a quantum material, determining whether it has a spectral gap is an ‘undecidable’ question. 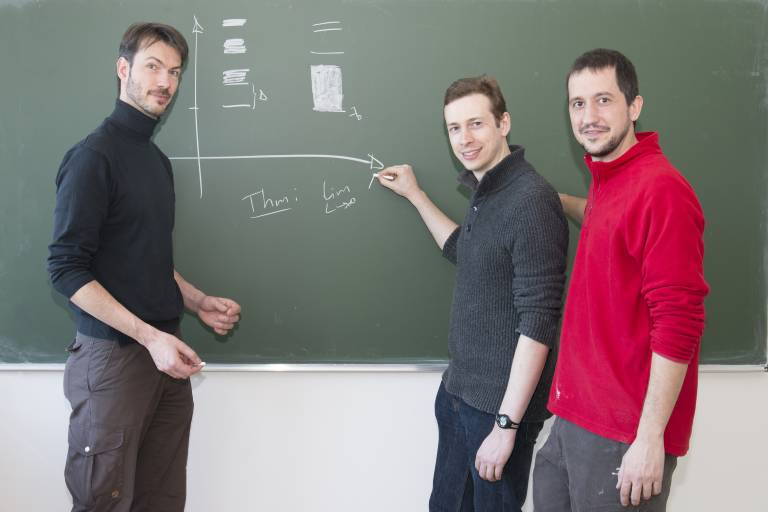 Co-author, Dr Toby Cubitt from UCL Computer Science, said: “Alan Turing is famous for his role in cracking the Enigma code, but amongst mathematicians and computer scientists, he is even more famous for proving that certain mathematical questions are `undecidable’ – they are neither true nor false, but are beyond the reach of mathematics.

“What we’ve shown is that the spectral gap is one of these undecidable problems. This means a general method to determine whether matter described by quantum mechanics has a spectral gap, or not, cannot exist. Which limits the extent to which we can predict the behaviour of quantum materials, and potentially even fundamental particle physics.”

The most famous problem concerning spectral gaps is whether the theory governing the fundamental particles of matter itself – the standard model of particle physics – has a spectral gap (the `Yang-Mills mass gap’ conjecture). Particle physics experiments such as CERN and numerical calculations on supercomputers suggest that there is a spectral gap. Although there is a $1m prize at stake from the Clay Mathematics Institute for whoever can, no one has yet succeeded in proving this mathematically from the equations of the standard model.

Dr Cubitt added, “It’s possible for particular cases of a problem to be solvable even when the general problem is undecidable, so someone may yet win the coveted $1m prize. But our results do raise the prospect that some of these big open problems in theoretical physics could be provably unsolvable.”

“We knew about the possibility of problems that are undecidable in principle since the works of Turing and Gödel in the 1930s,” added Co-author Professor Michael Wolf from Technical University of Munich. “So far, however, this only concerned the very abstract corners of theoretical computer science and mathematical logic. No one had seriously contemplated this as a possibility right in the heart of theoretical physics before. But our results change this picture. From a more philosophical perspective, they also challenge the reductionists’ point of view, as the insurmountable difficulty lies precisely in the derivation of macroscopic properties from a microscopic description.”

Co-author, Professor David Pérez-García from Universidad Complutense de Madrid and ICMAT, said: “It’s not all bad news, though. The reason this problem is impossible to solve in general is because models at this level exhibit extremely bizarre behaviour that essentially defeats any attempt to analyse them. But this bizarre behaviour also predicts some new and very weird physics that hasn’t been seen before. For example, our results show that adding even a single particle to a lump of matter, however large, could in principle dramatically change its properties. New physics like this is often later exploited in technology.”

The researchers are now seeing whether their findings extend beyond the artificial mathematical models produced by their calculations to more realistic quantum materials that could be realised in the laboratory.

The research was funded by the John Templeton Foundation, the Royal Society (UK), the Spanish Ministry of Economics and Competitiveness (MINECO), the Madrid Regional Government and the European Research Council (ERC).

The research is presented in the following paper: