Spins in silicon are feeling electric

Spins in silicon are feeling electric

Scientists at UCL have developed a new way of changing information stored in quantum bits – a vital technology for ensuring computers continue to increase in power over the next century.

Classical computer architecture is coming close to its limits. The ever increasing power of computer chips rests in part on making the circuits inside them ever smaller – but these are now so small, just a few atoms across, that there is not much further to go.

Quantum computing, in which the 1s and 0s of binary code that computers process are replaced by values that can be both 0 and 1 at the same time, is a promising technology for further improving computer performance. In theory, quantum computers should be able to carry out multiple operations in parallel. 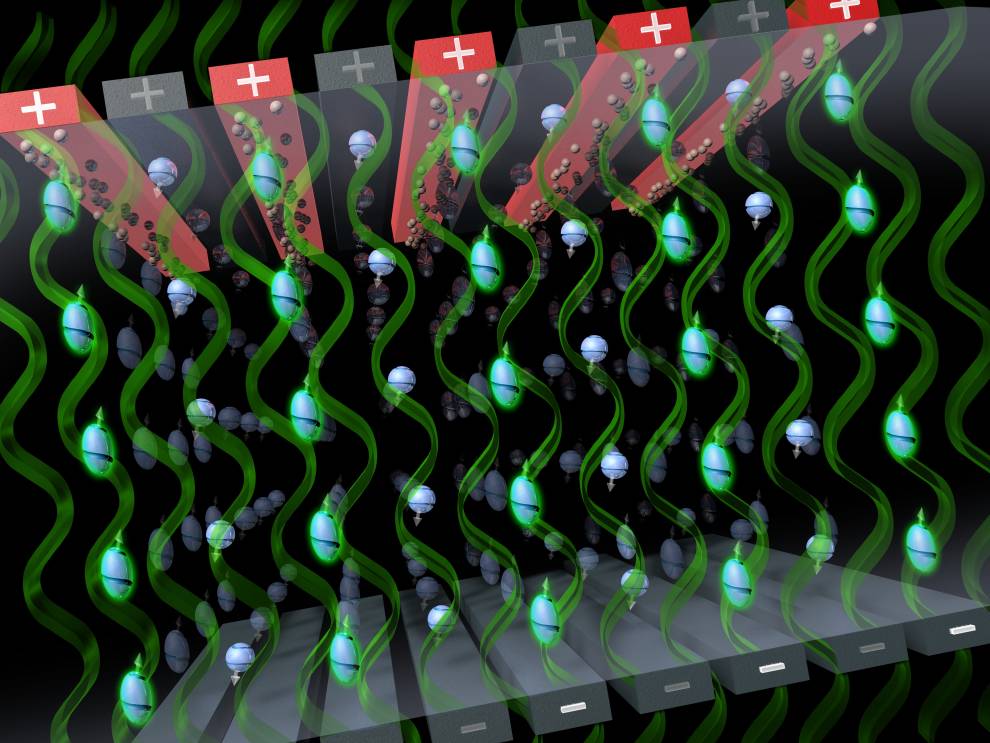 Classical computers represent 0s and 1s with circuits which are either open or closed – essentially, many billions of microscopic switches. These 0s and 1s are known as ‘bits’. If they are to become a viable replacement for classical computers, quantum computers need to have a chip technology which can physically encode bits which are both 1 and 0 at the same time, using the ability of quantum systems to exist in several states at once (known as quantum superposition). These quantum bits are known as ‘qubits’.

“One way of creating a qubit is to encode the information using the spin in a particle,” explains Gary Wolfowicz, the study’s lead author and a PhD researcher in the London Centre for Nanotechnology at UCL. “The direction of a particle’s spin, and hence its magnetic orientation, follows quantum principles, and can exist in both states at once. The challenge is building a system in which the spin is quite stable, and so doesn’t change on its own, but still easy to modify when you want to manipulate it.”

The team experimented with a material that is already used in classical computer design: the silicon wafers which integrated circuits are etched onto. As in classical computer chips, the silicon had a small amount of a different element – in this case, antimony – dispersed through it. Since antimony atoms have one extra electron in their outer shells, this normally creates a sea of unbound electrons that can move throughout the silicon, the key property that makes them behave as semiconductors and allows transistors to be made out of them. The team’s technique departs from classical computing in what happens next: they immobilise these electrons by cooling down the silicon, then use the antimony atoms as their qubits, encoding information in their spin.

Using a technique that is already widely used in the construction of computer chips is a great advantage. Techniques for creating silicon wafers are now very advanced, meaning that they are extremely pure and have very few defects. This gives silicon an advantage over more novel materials – for example, this purity means the spins in silicon can keep their quantum state for up to a few hours, so the information encoded in them is long-lasting.

“Spin is a magnetic phenomenon, so the easiest way to change its orientation is to apply an oscillating magnetic field whose frequency resonates with the particle’s spin,” Wolfowicz says. “Unfortunately, it is very difficult to apply such magnetic fields locally to individual quantum bits within a processor, but this is necessary in order to be able to control the states of different qubits.” Electric fields are much easier to apply locally – you merely need to apply a voltage to a tiny wire close to your qubit, without the need for large and heat-wasting coils. The trouble is that electric fields do not directly affect spins.

The team’s solution was to use the electric field to pull at the electrons, moving them slightly further away from the antimony nuclei, changing their resonance frequency. This makes it possible to subject the entire silicon crystal to an oscillating magnetic field, but antimony atoms that are being tugged at by the electric field don’t respond. “It’s like a sergeant barking the same orders at a whole platoon of spins” said Prof John Morton, who leads the Quantum Spin Dynamics group at UCL, “but we give some of them earplugs.”

This is the first practical demonstration for spin-qubits in silicon of how to use electric fields to ”switch” on and off the qubit response to the magnetic field. The team has not yet managed to narrow down the effect to a single atom, but combined with recent demonstrations of control of single spins by collaborators in UNSW, this represent a major step towards selective control of qubits, and more importantly a scalable silicon-based quantum computer.