A common blue pigment could have an important role to play in the development of a quantum computer, according to a paper published today in the journal Nature.

The pigment, copper phthalocyanine (CuPc), which is similar to light harvesting section of the chlorophyll molecule, is a low-cost organic semiconductor that is found in many household products, including the £5 note.

Now, researchers from the London Centre for Nanotechnology at UCL and Imperial College and the University of British Columbia have shown that the electrons in CuPc can remain in ‘superposition’ – an intrinsically quantum effect where the electron exists in two states at once – for surprisingly long times, showing this simple dye molecule has potential as a medium for quantum technologies.

Crucially, CuPc can be processed into a thin film that can be readily used for device fabrication, a significant advantage over similar materials that have been studied previously.

The development of quantum computing requires precise control of tiny individual “qubits”, the quantum analogs of the classical binary bits, ‘0’ and ‘1’, which underpin all of our computation and communications technologies today. What distinguishes the “qubits” from classical bits is their ability to exist in superposition states.

The decay time of such superpositions tells us how useful a candidate qubit could be in quantum technologies. If this time is long, quantum data storage, manipulation and transmission become possible.

Lead author Marc Warner from the London Centre for Nanotechnology, said: “In theory, a quantum computer can easily solve problems that a normal, classical, computer would not be able to answer in the lifetime of the universe. We just don’t know how to build one yet. 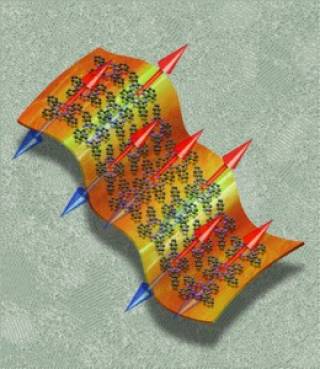 “Our research shows that a common blue dye has more potential for quantum computing than many of the more exotic molecules that have been considered previously.”

CuPc possesses many other attributes that could exploit the spin of electrons, rather than their charge, to store and process information; highly desirable in a more conventional quantum technology. For example, the pigment strongly absorbs visible light and is easy to modify chemically and physically, so its magnetic and electrical properties can be controlled.

Dr Warner added: ”The properties of copper phthalocyanine make it of interest for the emerging field of quantum engineering, which seeks to exploit the quantum properties of matter to perform tasks like information processing or sensing more effectively than has ever been possible.”

Image caption: Phthalocyanine thin film on a flexible plastic substrate, showing the coexistence of long-lived “0” and “1” qubits on the copper spin. The molecules form a regular array together with the metal-free analogues, and the background represents the lattice fringes of the molecular crystals obtained by transmission electron microscopy. Image Credit: Phil Bushell, Sandrine Heutz, Gabriel Aeppli, and James Gilchrist.