A normally fragile quantum state has been shown to survive at room temperature for a world record 39 minutes, overcoming a key barrier towards building ultrafast quantum computers. The research, published in the journal Science, was led by Mike Thewalt (Simon Fraser University, Canada), with involvement from researchers at UCL and Oxford University, and material provided from collaborating institutes in Berlin. 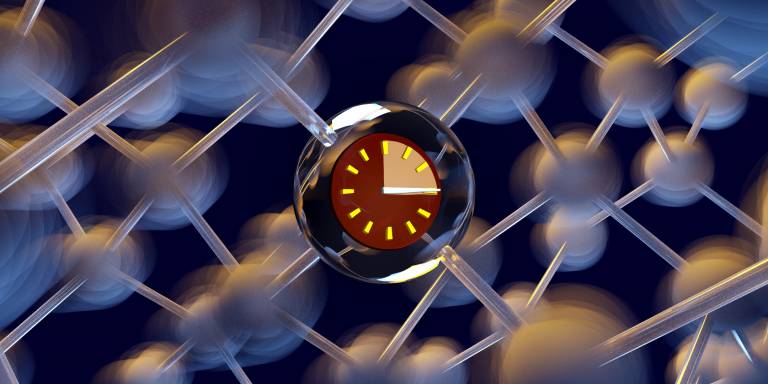 In conventional computers data is stored as a string of 1s and 0s. In the experiment quantum bits of information, known as qubits, were put into a state of superposition in which they can be both 1s and 0 at the same time – enabling them to perform multiple calculations simultaneously. This is normally only possible at very low temperatures.

In the experiment the team used a system in which silicon is ‘doped’ with phosphorus atoms, and information is encoded in the phosphorus atoms’ nuclei. Raising the temperature from -269 °C to 25 °C, the scientists discovered that the superposition states survived at this balmy temperature for 39 minutes. Outside of silicon the previous record for such a state’s survival at room temperature was around two seconds.

“For a few years we’ve known that the nuclear spins for dopant atoms in silicon can be used as a long-lived memory for electron spins, a bit like a computer’s hard disk,” says UCL’s John Morton (London Centre for Nanotechnology), a co-author of the research. “This work shows that removing the electron away from the dopant atom allows the information in the nuclear spin to live even longer – as long as three hours.”

The team even found that they could manipulate the qubits as the temperature of the system rose, and that they were robust enough for this information to survive being ‘refrozen’ (the optical technique used to read the qubits only works at very low temperatures).

Thirty-nine minutes may not sound particularly long, but since it only takes a tiny fraction of a second to run quantum computations by flipping the spin of phosphorus ions (electrically charged phosphorus atoms), many millions of operations could be carried out before a system like this decays.

“This opens up the possibility of truly long-term coherent information storage at room temperature,” said Mike Thewalt (Simon Fraser University), the lead researcher in this study.

The team began with a sliver of silicon doped with small amounts of other elements, including phosphorus. They then encoded quantum information in the nuclei of the phosphorus atoms: each nucleus has an intrinsic quantum property called ‘spin’, which acts like a tiny bar magnet when placed in a magnetic field. Spins can be manipulated to point up (0), down (1), or any angle in between, representing a superposition of the two other states.

The team prepared their sample at -269 °C, just 4 degrees above absolute zero, and placed it in a magnetic field. They used additional magnetic field pulses to tilt the direction of the nuclear spin and create the superposition states. When the sample was held at this cryogenic temperature, the nuclear spins of about 37 per cent of the ions – a typical benchmark to measure quantum coherence – remained in their superposition state for three hours. The same fraction survived for 39 minutes when the temperature of the system was raised to 25 °C.

“These lifetimes are at least ten times longer than those measured in previous experiments,” says Stephanie Simmons (University of Oxford), who collaborated in the study. “We’ve managed to identify a system that seems to have basically no noise. They’re high-performance qubits.”

There is still some work ahead before the team can carry out large-scale quantum computations. The nuclear spins of the 10 billion or so phosphorus ions used in this experiment were all placed in the same quantum state. To run calculations, however, physicists will need to place different qubits in different states.

The technology also has potential applications outside of computing.

“Quantum mechanics tells us that is physically impossible to make a true copy of a quantum state – which has led to proposals for fundamentally unforgeable banknotes based on keeping quantum systems in superposition states,” says John Morton. “Although quantum money remains a long way off, if these record-breaking coherence times of nuclear spins in silicon could be extended further, they could find use in ultra-secure authentication devices.”