The DPIM (DNA Polymorphisms in Mental Illness) research takes place at the UCL Molecular Psychiatry Laboratory. We have been conducting genetics research for over 30 years. Recent advances in technology mean that genetics research is starting to have a real impact scientific understanding of how treatments work and identifying new effective treatments for bipolar disorder, schizophrenia and alcohol dependence. 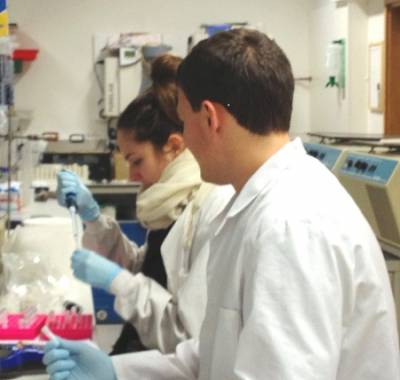 Why do we do our research?

Our research is concerned with improving treatments for people with bipolar disorder using genetic research. We already know there are many different genes causing subtypes of bipolar disorder. It is the variation in genes, known as polymorphisms, that help us work out which genes and which abnormalities in these genes are involved in the cause of bipolar disorder. All genes in the human chromosomes contain many polymorphisms which are entirely normal and harmless. However these polymorphisms can be used to detect the actual genetic abnormalities involved in genetic susceptibility to mental illnesses when they are very close together on the same region of a chromosome.

How do we do our research?

In order to investigate these polymorphisms we carry out research in one of two ways. One way is study large numbers of people with bipolar disorder disorder and to compare the frequency of polymorphisms with people who do not have any affective disorder. This is called a case-control allelic association analysis. The other approach is to study responsiveness to drug treatments and to test whether genetic polymorphisms can predict who responds to which treatment. Overall our aim is to understand the multiple causes of bipolar disorder so that we can create much better treatments and also to be able to predict who will respond to which treatment.

For the case-control analysis, we are involved in large studies called allelic and genome wide association studies. By comparing thousands of people with and without bipolar disorder we can overcome the problem of multiple genetic subtypes being present and find polymorphisms that point to where a bipolar disorder susceptibility gene might be. For this, we need to ensure the differences we find are due to individuals having bipolar disorder or not, not from being from different ancestral backgrounds, hence the questions about your ancestry.

We would then study this gene or region in more detail, in DNA sequence data using DNA extracted from blood samples from many thousand of people who are already involved in the DPIM study. When we find a polymorphism in a gene we look at what impact this change has on the protein it codes for. Then we take that information and see if this protein is a target for existing drug treatments or whether it could be a good target for novel treatments.

Drug responsiveness analysis works in much the same way but instead of comparing people with and without bipolar disorder, we compare people who respond well to a drug and those that don't, e.g. lithium. This way we can look at which genes and cellular mechanisms might be involved in the way lithium works in the body. This enables us to increase our understanding of how lithium and other drugs might exert its therapeutic effects and also help us to understand how to prevent some rare but serious side effects. By identifying bipolar sufferers with specific polymorphisms we will be able to prevent specific side effects.

How will genetic research impact treatment?

The vision of our research for the future is that we will be able to tailor the medication which gives the best response with minimal side effects to each individual. One day, if you are diagnosed with bipolar disorder, your psychiatrist will be able to take your blood and say "this treatment will work for you at this dosage" and then you will be able to continue to work or take care of responsibilities without fearing a relapse. This will also avoid all the juggling of medications and side effects!