The RADAR study is still running during the current Covid-19 pandemic, in a more remote capacity. We are conducting most assessments via phonecall for the time-being to ensure the safety of our participants and researchers. If you have any questions about the study during this time, or would like any further information, then please contact us at radar@nelft.nhs.uk

See what we've been up during the summer/autumn of 2020 in our latest newsletter below. 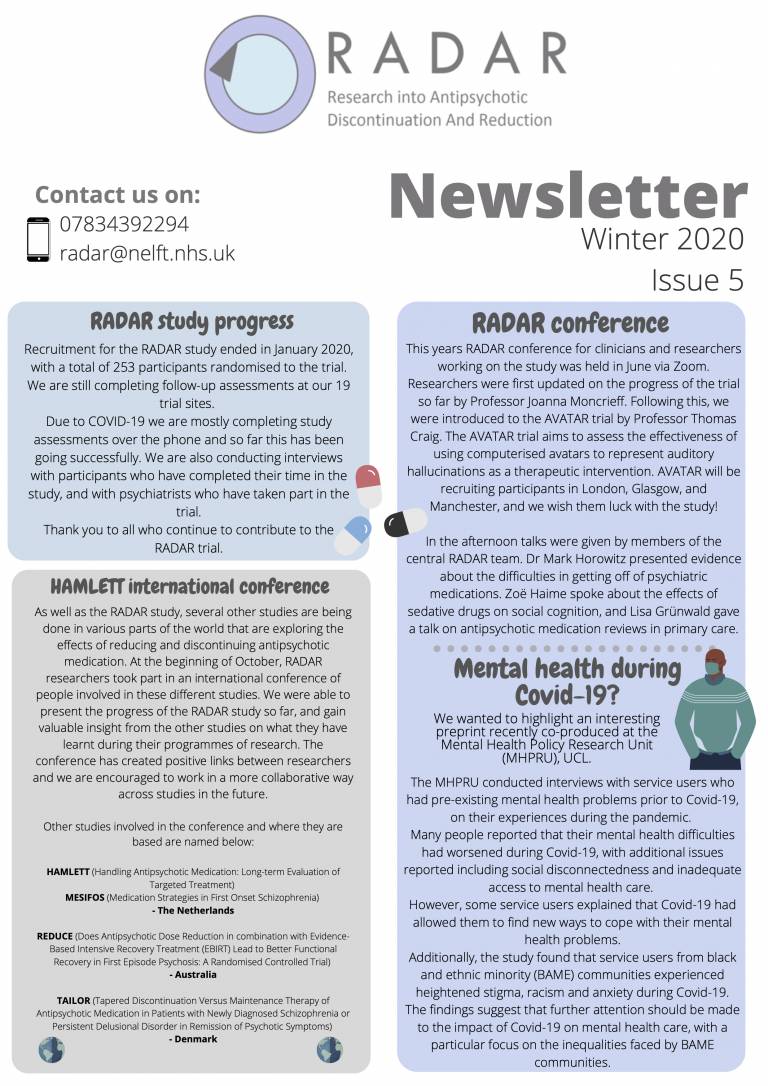 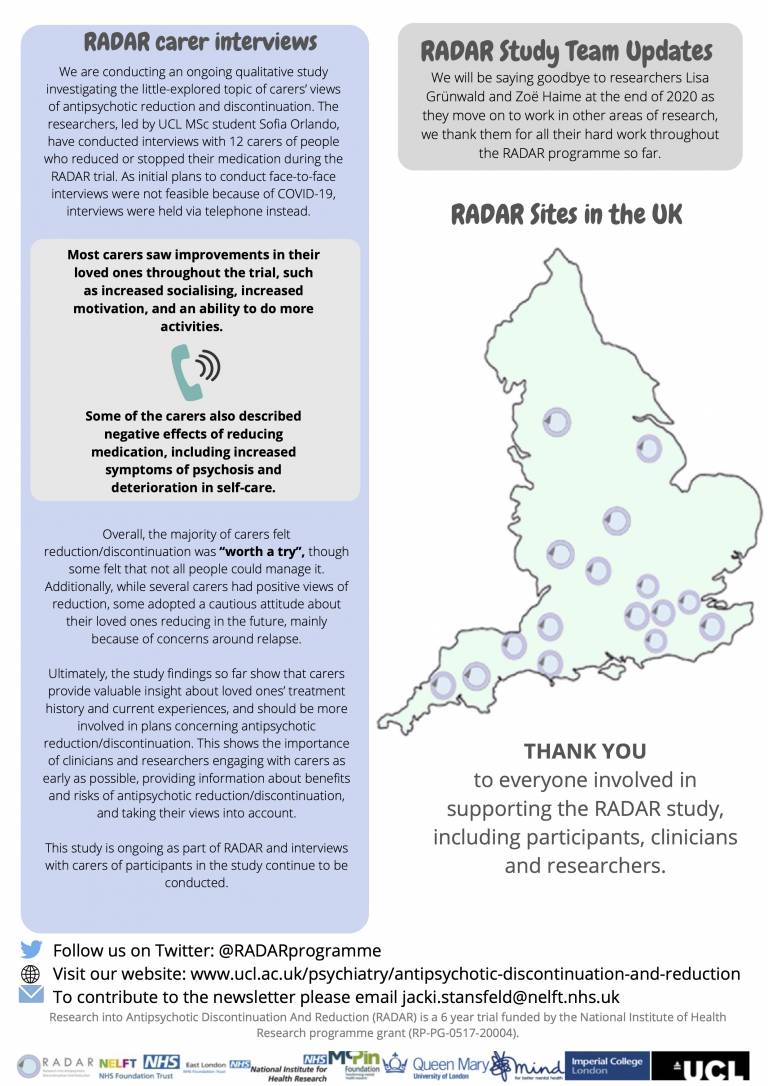 Please take a look at the most recent RADAR newsletter below! 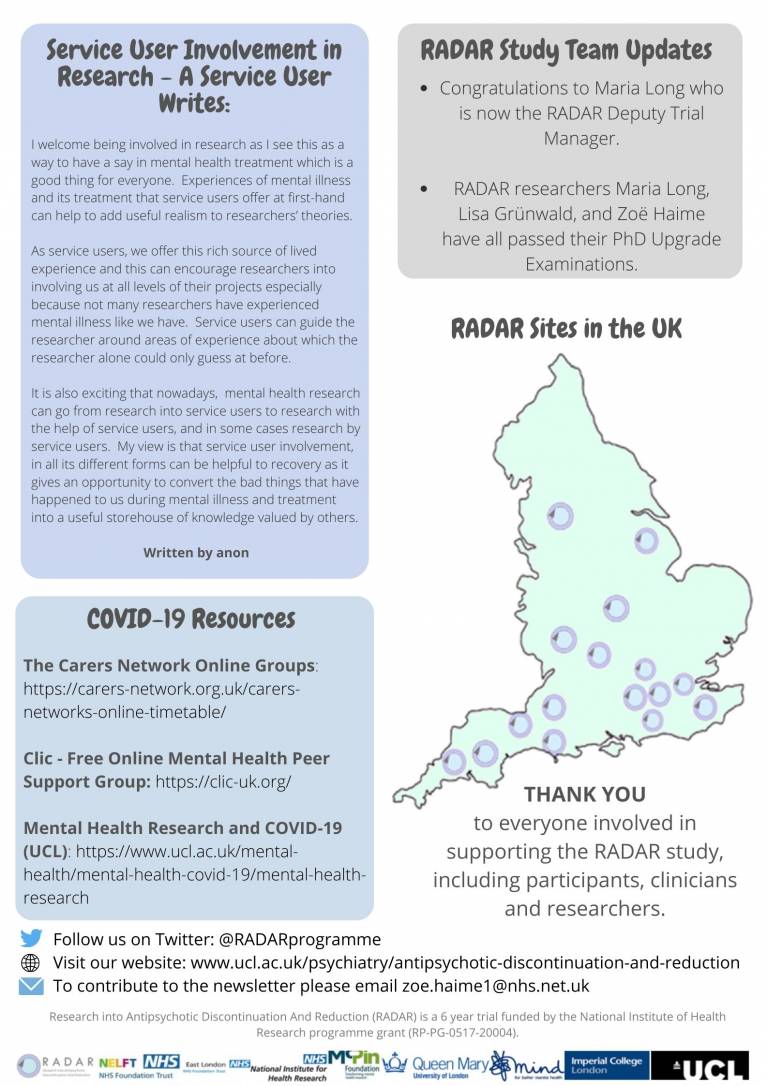 An Interview with Sandra Jayacodi, a member of the RADAR LEAP (Lived Experience Advisory Panel), and RADAR peer researcher. 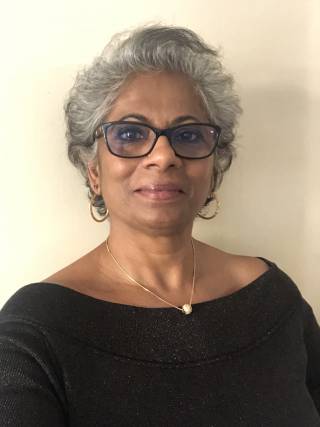 What has been your experience with antipsychotic medication?

I am taking Quetiapine currently; I have some side-effects from the medication. It makes me want to eat, I get hungry and raid the cupboard at midnight, 1, 2am and it’s made me put on quite a lot of weight. As well as the worries of weight gain related to physical health, I’ve found it’s effected my self-esteem as I’ve become more conscious of the way I look.

I never knew the side-effects of the antipsychotic drugs when I started taking them, no-one ever talked it over with me. I never read the leaflet, people don’t with any drug really! I’ve been on this drug since 2007, so 13 years. When I was prescribed this medication, no-one spoke to me; in the hospital, in the community, my GP, no-one spoke to me. It seems to be a theme that people diagnosed with severe mental illness who are admitted to hospital do not learn about the side effects of the antipsychotic drugs that are given to them. Some common feedback I have received from professionals, is that when patients are admitted they are so ill telling them the side-effects of medication is the last thing on the professional’s mind.

I heard about the concept of RADAR, finding out about reducing antipsychotic medication, and I felt like it was right up my street. It made me realise I could have a choice with regards to my medication and about eventually coming off the drugs. Nobody ever spoke to me about coming off my drugs or about reducing the medication, or even about changing my antipsychotic. The sheer fact you can come out of it (using the medication) is the thing that intrigued me about the RADAR study.

The other thing is that when a psychiatrist prescribes an antipsychotic, they make it feel that it will be forever. Why can’t they recognise when someone is getting better or someone is stable, they can perhaps reduce the medication. Then if someone is having an episode or a big event happens in their life, it can be open for the medication to be introduced again if needed.

We also know that the life expectancy of people with serious mental illnesses can be reduced by up to 20 years.  It’s the lifestyle changes that come with the drugs, like eating and putting on weight that leads to obesity, which can then lead to difficulties with physical health and life expectancy. I only found out the life expectancy is lower in serious mental illnesses from my previous involvement in a quality improvement project, I had never been told that by my care team. It’s all information, the life expectancy, and medication possibilities, that I should have been given earlier, and not things I should have learnt by chance. I think we should have these conversations with patients as early as possible, that medication may not be forever, that it may be reduced in the future.

How have you been involved with the RADAR study?

I have been a member of the LEAP since the beginning of the study, advising on different parts of the research.  Being part of the panel has been really important to me. Not only have I had the opportunity to share ideas about and get involved in the research, I have also met people who have had similar experiences to me and I have been able to learn about their own journeys with antipsychotic medications and how they cope.

I have also presented on behalf of RADAR at their conferences, and externally at a research event in Bristol about my experiences with mental illness and antipsychotics and how I feel about being involved in a trial like this.

Amongst the current chaos we are able to confirm we have an overall recruitment figure of 253 randomised participants enrolled in the RADAR study. Recruitment lasted from March 2017 to January 2020, and a total of 19 NHS sites across the UK have been involved. The trial will be following up participants for two more years until all assessments are completed. We are currently also recruiting some participants who have finished their assessments to take part in interviews evaluating their experiences of the trial processes. We will continue to update this website with all of our progress over the next few years!

Recruitment for the RADAR study has now ended and we are in the process of completing baseline assessments and finalising the participant numbers. We would like to thank all sites for their continued committment to the study, and all of our participants for their involvement. As some of our participants have completed their time in the study, many others have just begun, and so we will be continuing to update this site with our progress and ongoing research activities.

Remember to take a look at our latest published papers on our Publications Page including our Protocol Paper, which outlines the methodology for the RADAR study and how we propose to analyse our data.

With just over two months left of recruitment for the RADAR study we have published our latest newsletter. If you are interested in taking part in the RADAR study as a participant or as a clinician, please get in touch at: radar@nelft.nhs.uk

Today we said goodbye to our Programme Manager, Dr Nadia Crellin, who has worked on the RADAR study from the beginning and been a part of NELFT R&D for ten years. We wish her well with her new role and all the success in her future plans.

RADAR held our second conference for researchers and clinicians involved in the study. Principal Investigator Professor Moncrieff started off the conference with an update of the RADAR trial progress and re-emphasised the importance of the study by considering some recently published research on the effects of antipsychotic medications. 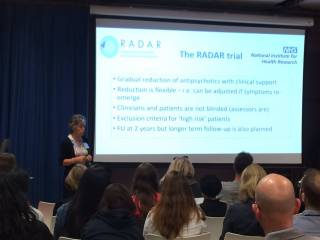 Co-applicant Professor Stefan Priebe summarised some lessons learned from four different trials he has worked on and discussed some of the difficulties with randomised controlled trials (RCTs) in clinical settings. 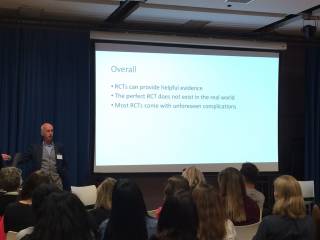 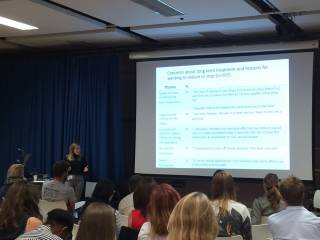 Discussions were sparked by a talk from the study doctor Dr Mark Horowitz who explored antidepressant withdrawal syndrome and suggestions for how to cope when reducing antidepressant medication. 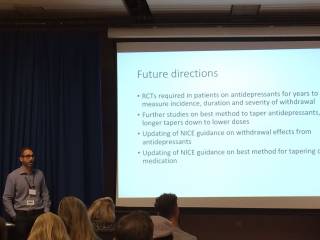 One of the RADAR PhD students and Research Assistants, Maria Long, talked about her ongoing PhD research into social functioning in psychosis from a patient-centred perspective, with considerations about how the concept of social functioning has changed over time. 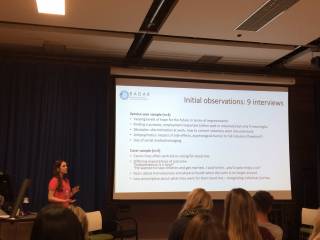 Two members of our LEAP group, Sandra Jaycodi and RADAR co-applicant Katherine Darton, discussed their experiences with antipsychotic medication and particularly focussed on the need for doctors to give more information on the side effects of these medications to patients. 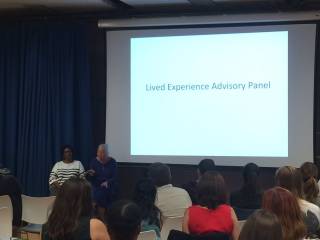 Finally, UCL MSc graduate Amy Lewins who completed a placement with the RADAR study, alongside

RADAR Researcher Johura Akther-Robertson, presented the results of their qualitative study of carers’ views of antipsychotic reduction and discontinuation. 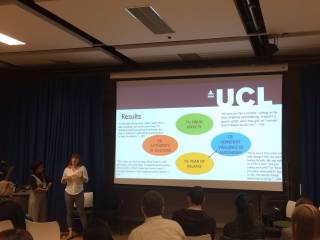 We would like to congratulate our Chief Investigator, Joanna Moncrieff, on her promotion to Professor at UCL Department of Psychiatry.

The latest RADAR newsletter has been published, see the Spring 2019 newsletter by clicking the link below.

In February, RADAR held their first conference for researchers and clinicians involved in the study. The conference aimed to look further into why we are doing the project, with a talk from Dr Moncrieff highlighting our current lack of evidence on the long-term use of antipsychotic medication. We also heard from members of our LEAP group, Sandra Jaycodi, Jonny Benjamin (MBE), and RADAR co-applicant Katherine Darton, who told us their personal experiences of using antipsychotic medication and their thoughts on the RADAR study.

In the afternoon we heard two very interesting talks from Professor Andrew Molodynski and Professor Sonia Johnson on the difficulties faced in conducting randomised controlled trials in clinical settings, and how they were able to overcome these obstacles in their own research.

Lastly, we heard from Dr Ruth Cooper on her focus group research on RADAR, and from our three PhD students working on their own projects within the RADAR study; Lisa Grünwald, Zoë Haime, and Maria Long.

Dr Moncrieff recently presented at the 'Real Truth About Health' 2018 conference on 'How and Why we Misunderstand Psychiatric Medicine'. She also took part in a panel discussion on pharmaceuticals and the industry around them.

You can watch both of these talks on the below links.

An update on all of the sites currently involved in RADAR:

If you are a patient or clinician interested in the RADAR study and you are based at one of these sites then contact us on RADAR@nelft.nhs.uk 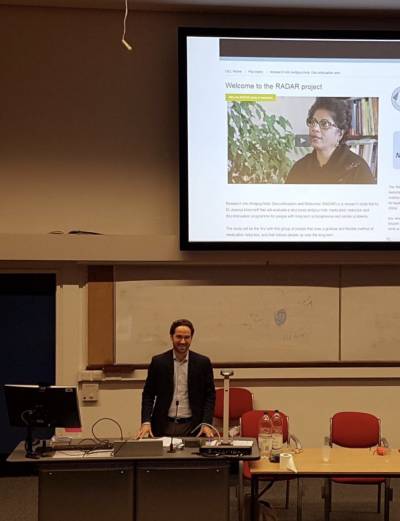 Tom Stockmann attended the 20th ISPS International Congress in Liverpool, the theme of which was 'Making real change happen'. He took part in a symposium entitled 'Reflections on a paradigm shift (in psychiatry)', together with Hugh Middleton, co-chair of the UK Critical Psychiatry Network. Tom discussed the current evidence regarding long-term antipsychotic use and described the RADAR programme. 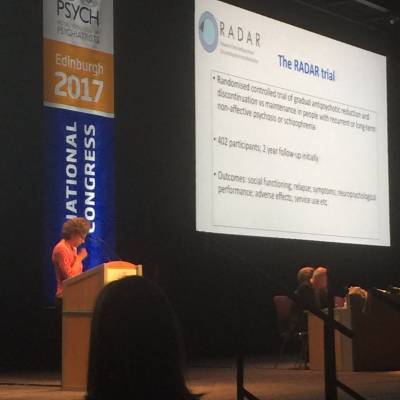 Joanna Moncrieff attended and presented at the International Congress 2017 the Royal College of Psychiatrists, themed 'Psychiatry without borders'. Her talk was titled 'Reducing and stopping antipsychotics in people with long-term psychosis: results of a patient survey and design of a randomised trial'. 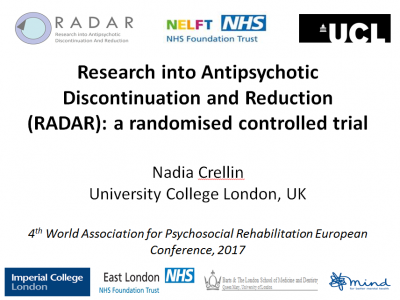 Nadia Crellin, RADAR Programme Manager, attended the 4th World Association of Psychosocial Rehabilitation European Regional Congress in Cesena, Italy entitled "About rights and duties: Institutions, Citizens and Services in mental health field". Nadia took part in the symposium entitled "Appropriate use of antipsychotics: actual debate between research and practices". Her presentation focussed on the RADAR trial and discussed current evidence regarding long-term antipsychotic use, the rationale for the trial and the design/methodology. Joanna Moncrieff took part in a symposium entitled "The dilemma of antipsychotic drugs: when to start and when to stop" at the American Psychiatric Association's  annual meeting in San Diego in May 2017. Her presentation was called "The Bitterest Pills: antipsychotic-induced mental alterations and the implications for the treatment of psychosis".

The presentation covered the inadequacies of the evidence base for long-term antipsychotic treatment and the growing data on the mental and physical alterations induced by antipsychotics. She outlined the reasons why the RADAR trial is necessary and important, and she described the design of the trial.

The symposium was scheduled for 8am on the first day of the conference, and despite fears that it would be too early for many, it was a full house, with people straining to get in and standing room only. The audience were particularly interested in the Radar trial, and asked interesting questions about how it would be conducted, and the clinical implications of its results. 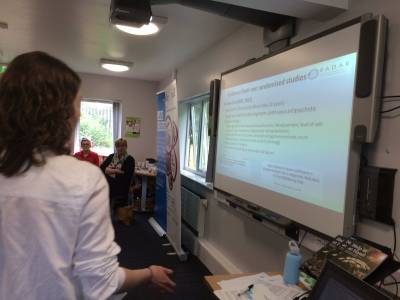 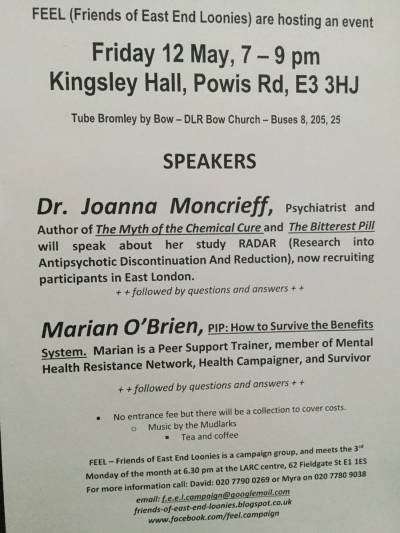 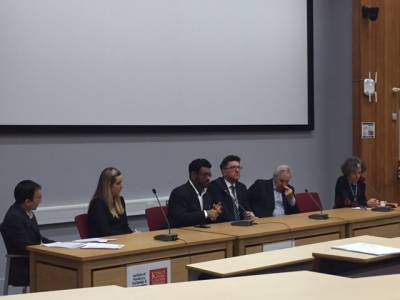 The paper makes the case that antipsychotics can have serious side effects, and that some people may be able to do well without having to take antipsychotic medication long-term. The authors urge psychiatrists to be more cautious in their use of antipsychotics.

Joanna and Ruth introduced the RADAR trial, and explained why it is necessary. The audience, made up of junior and senior psychiatrists, other professionals and members of the public, showed a lot of interest in the trial and how it will be conducted.