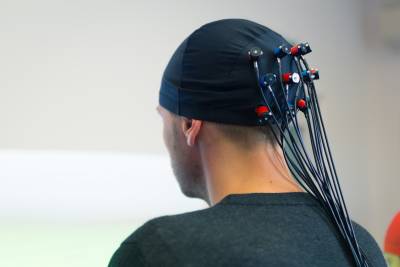 Many people are familiar with fMRI (functional Magnetic Resonance Imaging), which shows which parts of the brain are active (‘light up’) when people are doing different tasks. Another method for obtaining this kind of information is known as functional Near-Infrared Spectroscopy (fNIRS). fNIRS assesses brain activity by measuring changes in the properties of light as it shines through the skull and is refracted back to a specialised detector. The information obtained from these two methods is quite similar, at least for areas of the brain close to the surface. fNIRS, although not as accurate as fMRI in locating sources of activity, has some important advantages over it. fMRI is very expensive compared to fNIRS (at least 10 times the cost), so fNIRS is useful when many repeated measurements are desired, or when many participants need to be tested. Perhaps more importantly, many people cannot go into an MRI scanner because they have metal implanted in their body (e.g., those with a severe or profound hearing loss who have been provided with a cochlear implant). People also need to lie very still in an MRI scanner whereas fNIRS allows the participants to talk and move about more naturally. Finally, fMRI is much noisier than fNIRS, and that noise can have an impact on the study of many aspects of brain responses to sound, including the perception of speech and music. In short, fNIRS is a very useful method for the study of many aspects of cognitive function. 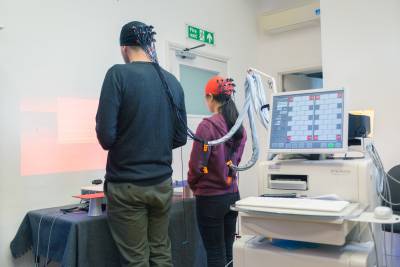 Our fNIRS system was obtained through a competitive collaborative cross-disciplinary Wellcome Trust Multiuser Equipment Grant, including investigators from various departments in the Division of Psychology and Language Sciences and the Ear Institute. It consists of a Hitachi ETG-4000 Optical Topography System, a continuous wave system working with two different wavelengths. In addition, we have a BIOPAC MP160 system with which we can monitor various physiological indicators useful as an adjunct to the optical signals from fNIRS (e.g., heart rate and skin conductance).

For more information, you can consult our Wiki or get in touch directly.