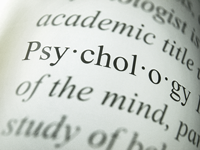 The psychological therapies research theme is focused on the development and evaluation of novel approaches to psychological treatment with a particular emphasis on individuals and families who have traditionally not been in receipt of or who were seen as not likely to benefit from psychological interventions including adults with personality disorders, children and young people with conduct disorders, adults with learning disabilities and substance misuse.

The theme has a strong commitment to the development of theory based approaches to treatment drawing for example on attachment theory and behaviour change theory. The theme has excellent links with basic neuroscience colleagues at which UCL which informs not only the development of new psychological interventions but also helps identify the psychological processes which underpin change in psychological interventions. These research themes also link with a range of post-graduate programmes in child development and neuroscience, and cognitive behavioural therapy for children and young people in conjunction with the Anna Freud Centre, and in research methods, cognitive neuroscience behaviour change and low-intensity cognitive behavioural interventions in conjunction with colleagues at UCL.

The trial has been running since 2009 to December 2017, funded by the Department for Children, Schools and Families and the National Institute for Health Research.

START is a multi-site trial of 700 families in the UK investigating form of intervention (multisystemic therapy) for young people and their families who are experiencing difficulties at home, at school and sometimes with the law. We are comparing Multisystemic Therapy (MST) with other services that are currently offered to young people and their families who are considered to be at ‘high risk’ of requiring out-of-home care such as fostering, social care or custody if associated with antisocial behaviour such as conviction as a young offender. The trial will answer the question of whether MST can contribute to significantly reducing the rate of out of home placement and see a (a) decrease in antisocial behaviour, (b) increase in the young person’s well-being, (c) improved educational outcomes and (d) improved family functioning.