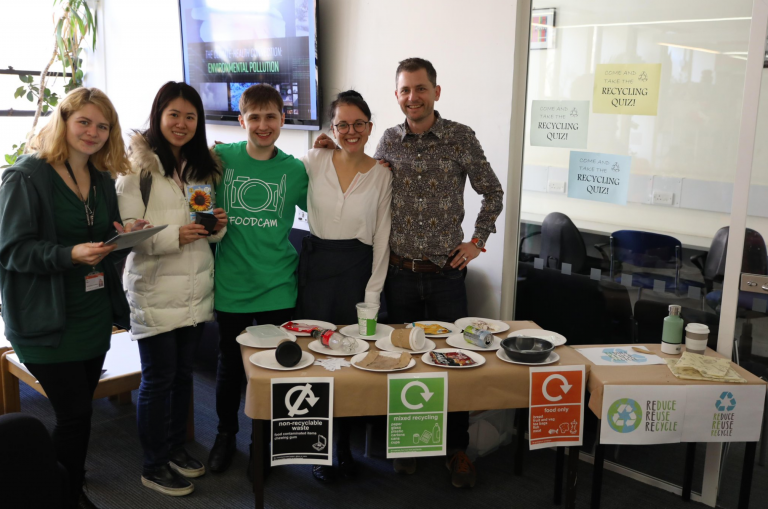 This year we launched the ‘PALS Green Wheel of Fortune’ where people spun a bicycle wheel and made a sustainability pledge (depending on where the wheel landed).

Seed planting was also in full flow: people were invited to use recycled plastic (e.g. yoghurt pots, plastic cups etc) to grow seeds that will blossom into gigantic office plants! We're encouraging everyone that planted a seed to keep us informed with their growing on social media (via the #PALSGREEN19 hashtag) so we can see who grows PALS's hottest chilli, largest sunflower and the beaniest bean throughout the year!

We had lots of people walk on the Famous Green Feet, eat veggie food in our cafeteria and watch green-themed films. Sabine’s recycling stall was also a great success, which included a recycling quiz to test recycling knowledge and learning about what we found in PALS bins in a large study last year. Plus there were some surprising facts on what can and can’t be recycled at UCL and tips for what you can do to reduce waste.

There was a talk on sustainability by Luke Jackson - a climate science researcher from Nuffield College in Oxford. Luke talked about the work he’s been doing researching the impact of climate change on sea levels and suggest ways we can get involved with the practical solutions that exist and work towards lowering our carbon footprint.

The PALS FoodCam also launched, which is a waste reduction project started by the PALS Green Impact Team that revolves around the simple principle that food is better in a stomach than in the bin. Anyone in the PALS community can advertise leftover food to others (who in turn can collect and eat the food). If you wish to take part (or just feel like eating free food) then join the Foodcam mailing list (send an email request to foodcam-join@ucl.ac.uk) and follow the PALSFoodcam on twitter (https://twitter.com/PALSFoodcam).

The day ended with vegan wine (and sustainable beer!) tasting. The vegan wines were from an organic wine company called Vintage Roots who won ‘Green Retailer of the Year’ in 2015 and pride themselves on running an ethical business. The beer came from a company called "Toast" who make award-winning beer brewed with fresh surplus bread. All the profits they make go to Feedback who aim to end food waste.

We’d like to say a big thanks to everyone involved in running the activities and also all those who took part. Watch this space for #PALSGREEN20…