A correlation between a first dose of the AstraZeneca vaccine and a small but significant rise in cases of the serious neurological condition Guillain-Barré syndrome (GBS), has been identified by UCL scientists, as part of an analysis of NHS data. 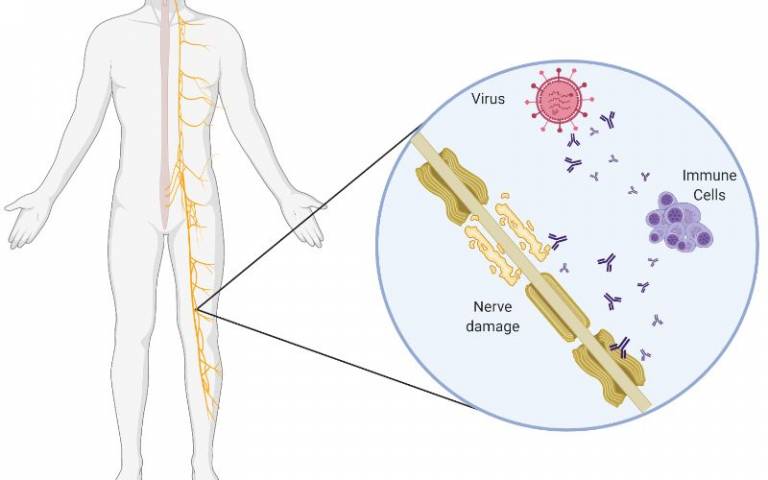 However, researchers say it remains unclear what the cause of the link is; furthermore the small numbers of GBS cases observed appear similar to increases previously seen in other mass vaccination campaigns.

The same team, based at UCL Queen Square Institute of Neurology, had previously shown there was no measurable link between Covid-19 infection and GBS; this subsequent study set out to investigate any relationship between GBS and Covid-19 vaccination.

Guillain-Barré syndrome (GBS) is a rare but serious autoimmune condition that attacks the peripheral nervous system, typically resulting in numbness, weakness and pain in the limbs and sometimes resulting in paralysis of breathing. GBS often occurs after infections, particularly a gastroenteritis infection called Camplylobacter, with the immune system mistakenly attacking nerves rather than germs.

For the study, published in the journal Brain, researchers carried out a population-based study of NHS data in England to track GBS case rates against vaccination rollout. Further, as part of a separate study of UK hospitals’ surveillance data, they looked at phenotypes (characteristics/symptoms) of reported GBS cases to identify whether there were any specific features of Covid-19 vaccine-associated GBS.

Researchers observed that between January to October 2021, 996 GBS cases were recorded in the UK National Immunoglobulin Database, but with an unusual spike in GBS reports occurring between March and April 2021. For these two months there were about 140 cases per month compared to historical rates of about 100 per month.

To identify whether any or all of these cases were linked to vaccination, they linked dates of GBS onset to vaccination receipt data held on the National Immunisation Management System in England for every individual.

Overall, following a first dose AstraZeneca vaccine there were 5.8 excess GBS cases per million doses of vaccine, equating to an absolute total excess between January-July 2021 of between 98-140 cases. First-dose Pfizer and Moderna and second-dose of any vaccination showed no excess GBS risk.

Commenting on the figures, lead author Professor Michael Lunn (UCL Queen Square Institute of Neurology) said: “Higher numbers of cases of GBS are seen in the period of two to four weeks after vaccination. A peak of cases observed around 24 days following a first dose.

“First doses of AstraZeneca vaccine account for the majority or all of this increase. A similar pattern is not seen with the other vaccines or following a second dose of any vaccine.”

In the separate phenotype study, researchers used a multi-centre UK-wide (four nations) hospital dataset, to collect incident data on GBS cases reported by clinicians between January 2021 and November 2021. Concluding this analysis, researchers found no specific clinical features, including facial weakness (which has received special attention in medical literature), were associated with vaccination-related GBS compared to non-vaccinated cases showing how difficult it is to spot vaccination linked cases from the background cases occurring normally.

Professor Lunn said: “The reason for the association between only AstraZeneca vaccination and GBS is unclear. Covid-19 infection does not have a strong, or possibly any, increased risk of GBS, and the lack of increased risk associated with Pfizer vaccination implies that it is unlikely that the Covid-19 spike protein is the causative factor for the increased risk. The viral vector used to carry the nucleic acid in the AstraZeneca and similar vaccines may be the reason but this needs further exploration.”

During the 1976 swine flu vaccination campaign in the USA, there was a small increase in GBS associated with what was a novel flu jab at that time. At the time, the vaccination campaign was halted because the risk of developing GBS was statistically increased from background (normal times), although subsequent statistical analysis found the risk of a link to be lower than initially thought.

The excess incidence following AstraZeneca first dose vaccine is estimated to be 5.8 cases per million doses, similar to the estimates for the 1976 ‘swine flu’ vaccine and higher (but within the same order of magnitude) as the reported excess cases for the modern influenza and yellow fever vaccines. It is far below the one in 1,000 rate of GBS associated with Campylobacter jejuni gastroenteritis or Zika-virus.

Professor Lunn added: “At the moment we don’t know why a vaccine may cause these very small rises in GBS.

“It may be that a non-specific immune activation in susceptible individuals occurs, but if that were the case similar risks might apply to all vaccine types.

“It is therefore logical to suggest that the simian adenovirus vector, often used to develop vaccines, including AstraZeneca’s, may account for the increased risk.

“Adenoviruses have not been strongly associated with GBS in previous studies, and any association between adenoviral vaccination and GBS has only once been reported. “Nevertheless, adenovirus testing is not routinely performed in cases of GBS in the UK, and whether adenoviruses may account for a proportion of ‘idiopathic’ (no known cause) or ‘SARS-CoV-2 negative’ GBS may be the subject for further study.”