Two papers from UCL show that having early chemotherapy improves survival for men with prostate cancer. 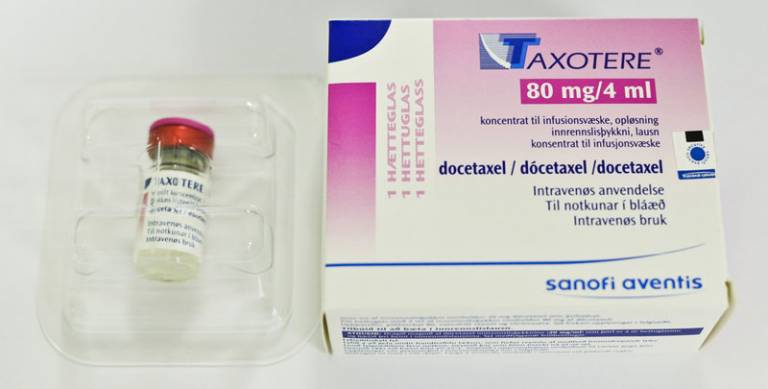 The papers, published in the Lancet and Lancet Oncology, report the results from the STAMPEDE clinical trial and a meta-analysis.

Both papers looked at the use of a chemotherapy drug called docetaxel. Docetaxel is already used for men with prostate cancer once hormone therapy has stopped working. In STAMPEDE and the meta-analysis, the researchers looked at using it earlier, when men are starting long-term hormone therapy. Both studies found that adding docetaxel improved survival for these men.

The meta-analysis brought together the results of STAMPEDE and all similar trials that were available. It found that, in men whose disease had spread to distant parts of their body, docetaxel increased the proportion of men alive at four years after joining the trial from 40% to 49%. It also increased the proportion of men whose cancer had not come back or got worse, from 20% to 36% after four years.

For men whose disease had not yet spread to distant parts of their body, docetaxel increased the proportion whose cancer had not come back or got worse after four years. However, there was no clear evidence yet that it helped men to live for longer. Further evidence will emerge as more trial results are published and trials like STAMPEDE follow-up patients for longer.

The meta-analysis found no evidence that zoledronic acid helped men to live for longer.