Supply and demand in prehistory 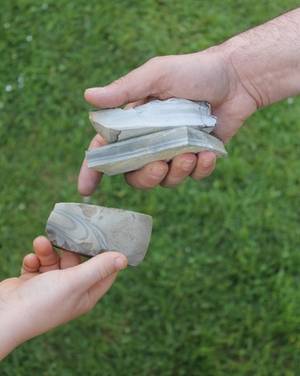 What factors influenced non-agricultural production in prehistory? Explicitly or implicitly this has long been a topic of debate in prehistoric studies, because it relates to the question of whether people in prehistoric societies had 'economic' motivations and what those might have been. It also connects archaeology to the long-standing debate in economic anthropology between 'formalist' and 'substantivist' approaches (see e.g. Plattner 1989) and to studies of the interaction of social rules and norms with the costs and benefits of different economic strategies (e.g. New Institutional Economics; North 1981; Ostrom 2005).

The project will approach these general issues by analysing the evidence for stone quarrying and flint mining and the factors affecting consumption of their products by Neolithic early farming communities in Britain and North West Europe over the period c.5300-2000 BC to address the question: what economic factors, if any, had an influence on their scale and intensity? In particular, did the amount of material they produced vary over time in response to external demand, and, if so, in what ways? It is known from ethnography, for example (Pétrequin and Pétrequin 1993), that the factors affecting demand for stone axes in Irian Jaya were very complex, but certainly included economic ones.

We now know that the quarries and mines of the Neolithic were often major enterprises, producing quantities of artefacts far beyond any imaginable requirement for local use; for example, the Rijckholt mines (Netherlands) are estimated to have produced between 13 and 61 million kg of flint over a period of 600 years (Felder et al. 1998, 75-77). Their products were often distributed over hundreds of kilometres. Studies over the years have documented the distribution of the products of some of the bestknown sources (e.g. Zimmermann 1995, Pétrequin et al. 2012, Clough and Cummins 1979; papers in Kerig and Shennan in press). We also have some information on when particular sources were in use (e.g. Rijkholt above, Schyle 2006, Allard 2005, Le Roux 1999). However, in general, radiocarbon dating of European mining activity is patchy at best and at worst highly skewed towards a few well known sites such as Grimes Graves in Norfolk. Moreover, there has been little attempt to systematically address the economic factors that might have affected the amount that was produced by different mines at different times. Indeed, after a period of strong interest in the nature of prehistoric production and exchange in the 1970s and 1980s (e.g. Earle and Ericson 1977) such economic approaches have largely fallen out of favour, especially among scholars of European prehistory. There has been an emphasis on cultural differences as an explanation for variation in practices, rather than as phenomena which themselves need to be explained (e.g. Roessler 2014).

The project is focussed on Britain and NW Europe (including Ireland, France, Belgium, the Netherlands, Denmark and Sweden) because these regions contain a large number of important flint mines and stone quarries and a great deal of fieldwork and scientific work on identifying raw material sources has taken place here over recent decades. However, with the exception of the work by Cooney on Ireland (e.g. Cooney and Mandal 1998) and Pétrequin and colleagues on the axes of jadetite and related material from the Alps of southern France and northern Italy (Pétrequin et al. 2012), the results have never been gathered together to ask large-scale questions such as those to be addressed here.