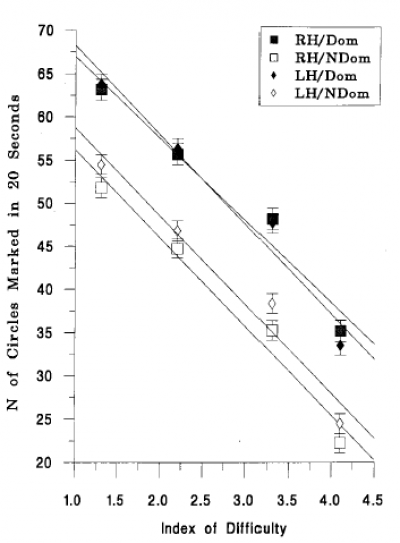 Marion Tapley and Phil Bryden published, in 1985, an easy and practical test of performance differences between the right and the left hand (Tapley & Bryden, 1985). It was characterised by its simplicity, consisting merely of a series of printed circles on a piece of paper, with the participant being required merely, with each hand in turn and in twenty seconds, to use a pencil to put a dot in as many of the circles as possible.  Particularly important was that the distribution was almost entirely bimodal, with no overlap between those who were better with their right hand and those who were better with their left hand.

As a part of his PhD thesis which I supervised, Jack Van Horn and I developed an extension of the Tapley and Bryden task which involved four different levels of difficulty, the circles being graded in size. In addition we used a felt-tip pen that left a clear mark on the paper (to detect when the mark was outside the limits of the circle). The pen had a diameter of 2 mms, which allowed the calculation of an index of difficulty, based on the approach of Hicks.

A brief document shows pages from Jack Van Horn's thesis, and in particular shows the title page, the four test sheets used, with their different diameter circles (10 mms, 5.5 mms, 3.3 mms and 2.5 mms). The centres of the circles are 15 mms apart.  Results are shown separately for right- and left-handers and it can be seen that the number of circles marked decreases linearly with task difficulty, at an equal rate in dominant and non-dominant hands. Intriguingly the absolute difference remains constant, and as a result the laterality index increases steeply as the task becomes more difficult. For more details of the thesis please click below:

There are also some corrections to the thesis.

Van Horn also used a number of variants on the Annett pegboard task (see Chapter 5 of the thesis) using pegboards in which the distances could be varied (the 'Universal pegboard' ) or a standard pegboard but with pegs of different sizes and either with round or square ends.  Click on the images below to see them. 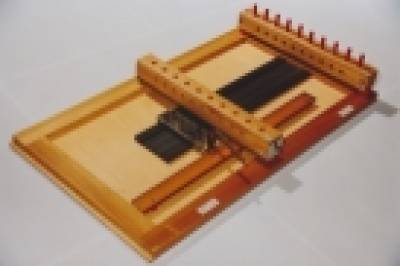 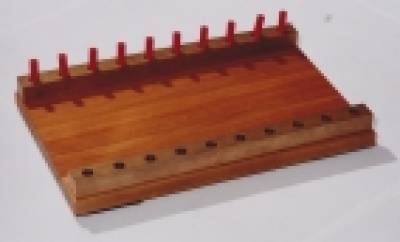 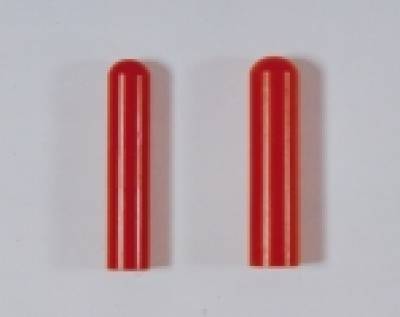 In 1994 Van and Horn and McManus had prepared a draft manuscript on the data in Jack's thesis, and both Phil Bryden and Pam Bryden were aware of it as Chris discussed it with them in Waterloo (and indeed it formed the starting point for the studies in Pam Bryden's PhD thesis).  The paper was submitted to the QJEP, the editor asked for a lot of changes and corrections, those requests came at a difficult time, and the eventual result was that the paper was never published, and after two decades the paper has been resurrected here from a filing cabinet where it had languished. As part of a commemorative issue of Laterality for the 20th anniversary of the death of Phil Bryden the results have been integrated with those of Pam Bryden in a new paper which has been submitted for publication in 2016. A draft of the manuscript can be read here.