Son of William and Mary Fitzherbert of Tissington Hall. He attended Westminster School and St John's College, Cambridge, graduating M.A. in 1770. He toured Europe with his neighbour William Cavendish, later fifth Duke of Devonshire, when they were both about twenty.
Practised as a barrister for 7 years though subsequently based at his seat in Derbyshire and ‘took a very active and useful share in the public business of that county as one of its Magistrates, and as Recorder of the borough of Derby’. (Collins’s Peerage of England, p. 162.)

On 14 October 1777 he married Sarah Perrin at St George's, Bloomsbury Square, London and through her reportedly inherited five plantations in Jamaica [in fact,t these estates appear to have passed to his son Sir Henry Fitzherbert, 3rd bart.]: Blue Mountain, Forest, Grange Hill and Vere (all sugar plantations) and the coffee plantation of Retrieve Mountain. He also owned Turner's Hall, Barbados. Sarah Perrin died in London and was buried at Tissington, 1795.

Fitzherbert became a baronet on 22 January 1784 and retired to the family seat of Tissington Hall. On his death in 1791 he was buried at Tissington and was succeeded by Anthony Perrin Fitzherbert his son with Sarah, his wife. His younger brother Alleyne FitzHerbert was a distinguished diplomat who became a baron in 1791. Anthony Fitzherbert, the second Baronet, died suddenly on 2 April 1798 aged 19. He was succeeded by Henry, his brother, the third son of the first Baronet.

The portrait of Fitzherbert is by Pompeo Batoni, c.1768. Licensed under Public Domain via Commons.

Justin Roberts records a visit by William Fitzherbert 'for the first time' in 1771. 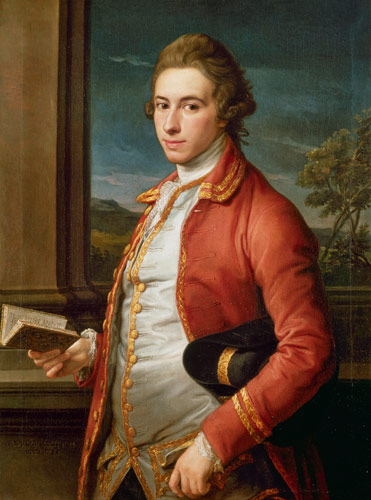