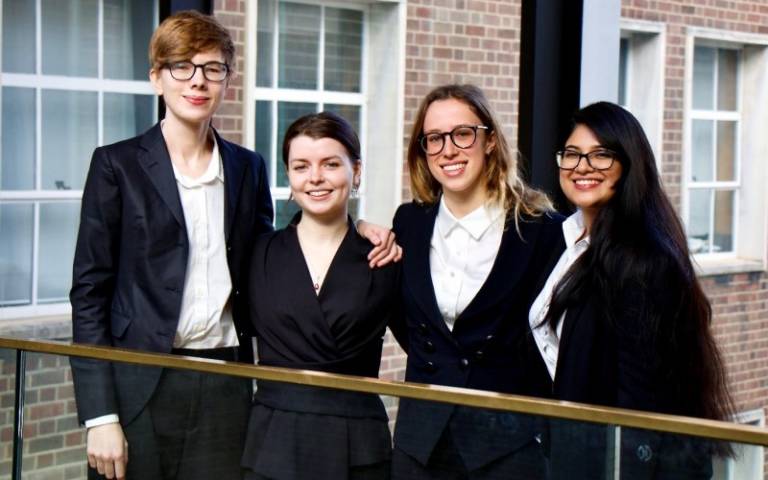 The Oxford Moot is arguably the most prestigious intellectual property law mooting competition, attracting applications from many distinguished law schools and barrister training organisations from around the world. The many entries received have been whittled down to 28 teams, selected based upon the quality of their written submissions.

The UCL team members, Rebecca Hauk, Verity Macinnes, Akanksha Majumdar and Zoe Salvatori are all currently studying intellectual property law at UCL Laws. Third year LLB students Rebecca, Verity and Zoe are joined by Akanksha, who is on the IP LLM course. The UCL team - coached by Professor Sir Robin Jacob, Sir Hugh Laddie Chair of Intellectual Property Law at UCL Faculty of Laws, and Joshua Bradley, an IBIL Scholarship PhD candidate - is one of only five teams from UK universities to make it through to the final oral rounds.

This year’s problem relates to an appeal lodged against the fictional Erewhonian case of Floyd’s Kitchins & Erewhonian Burrellshire Brandy Association v Greenland Supermarket [2021] HCE 107. Floyd’s Kitchins, makers of the Birss Butterfly Cake - a delicious sticky ginger cake decorated with frosting and Burrellshire Brandy Butter Icing – brought a copyright action against supermarket, Greenland, in relation to its 'knockoff' version of the cake. In the first instance proceedings, that claim failed since the judge held that the cake did not qualify as an artistic work under the Copyright Act. However, the Erewhonian Burrellshire Brandy Association successfully argued there was passing off by Greenland using a low-booze icing and calling it 'Burrellshire Brandy Butter Icing'. Its claim under the Protected Geographical Indications Act failed, however.

We wish the team the very best of luck!