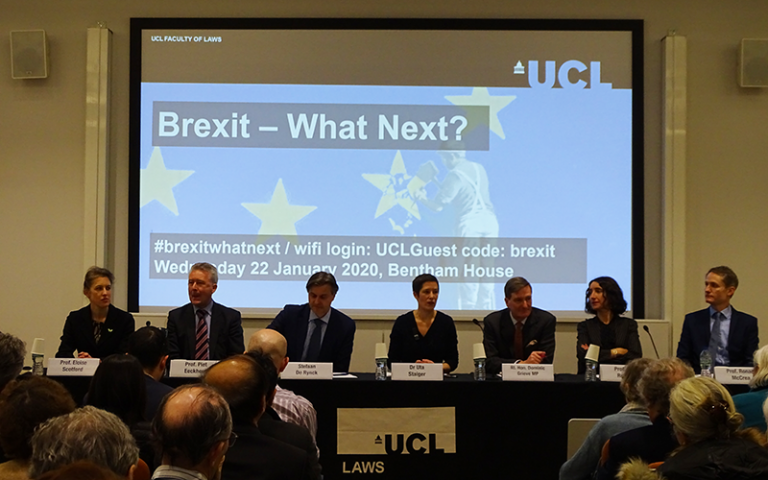 Last night, UCL Laws hosted a public event, ‘Brexit – What Next?’, discussing the issues arising in the next stage of Brexit to a packed audience in the Denys Holland Lecture Theatre.

The discussion was introduced by Dr Uta Staiger, followed by opening comments from Stefaan De Rynck and Dominic Grieve on the transition period and the current state of Brexit negotiations.

Professor Meg Russell spoke about the importance of parliament scrutiny with regards to the Withdrawal Agreement Bill, and also warned against the potential dangers associated with rising populism.

The discussion then went onto the topic of how the Brexit deal may impact the UK-Irish border, where Professor Ronan McCrea suggested that there are likely to be significant trade barriers between the UK and ROI.

Professor Piet Eeckhout then commented on the way forward for negotiating trade deals – a key issue in negotiating the Withdrawal Agreement – stating that leaving the Single Market would mean frictionless trade is lost.

Professor Eloise Scotford discussed how Brexit may affect environmental policy in the UK, warning that Brexit makes environmental law in the UK more complicated; and spoke about the dangers of a regression of environmental standards (such as air and water quality standards).

The panellists then took questions from the audience, with all panellists addressing a range of Brexit-related issues.

Full details of all panel members:

You can view a recording of 'Brexit - What Next?' further down the page or on the UCL Laws YouTube channel: