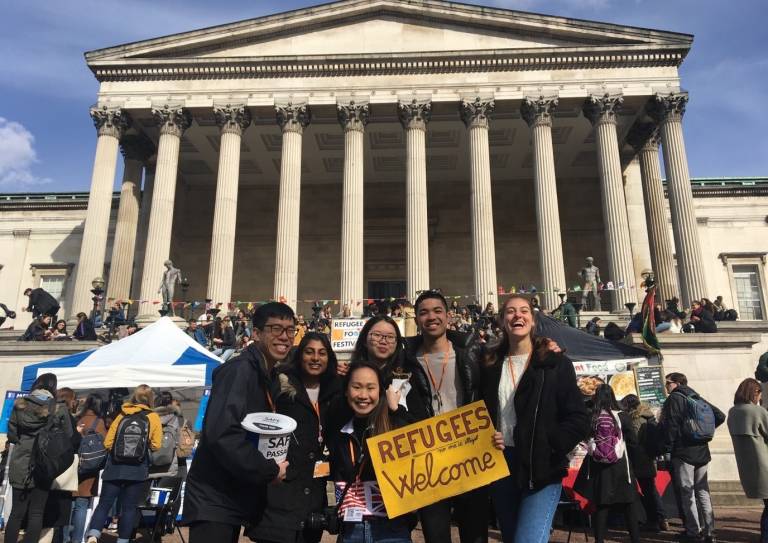 On 18 March, the Centre for Access to Justice Student Pro Bono Committee (CAJ SPBC) together with Student Action for Refugees (STAR) organised the first ever Refugee Food Festival at UCL.

The Festival, entirely led by students, was organised in support of the charity, Safe Passage, raising over £1,200 in total to support their work helping unaccompanied child refugees and vulnerable adults find safe, legal routes to sanctuary.

To bring the refugee crisis to life the students partnered with six food traders representing several of the host and home countries of refugees, including Syria, Greece, Turkey, France, Lebanon, Palestine, and Afghanistan. Through experiencing the food offered by each culture the students organising the Festival hoped that attendees would be reminded of our common humanity, and be inspired to stand in solidarity with refugees in future.

Also invited to the Festival were a range of organisations working with migrants and refugees including Help Refugees, Indigo Volunteers, Salusbury World, SolidariTee and Fenix Aid who provide material aid, fundraising and volunteers to hotspots around the world.

In addition to raising vital funds for Safe Passage, the Festival also aimed to raise awareness of the significant legal and physical barriers migrants and refugees face in attempting to flee persecution, famine, and conflict in their own countries. Informational flyers with short interviews on each food vendor and write-ups on the refugee crises in the corresponding countries were distributed, along with testimonies by UCL students who have volunteered to help refugees in Calais.

“It was our greatest hope to inspire the diverse student body at UCL to enter in the dialogue with not just facts and statistics but with a cultural understanding of refugees coming from different countries, which is critical considering how the plight of refugees and asylum-seekers has become increasingly ignored as an everyday reality in Europe. As part of the future, our generation has a responsibility to act, to become passionate voices for refugees and to make a difference to the lives of those whose very existence is in constant danger, yet they are perceived as threats to societies in which they seek to build a new home.”

Adam Riley, Projects Coordinator at the Centre for Access to Justice who provided the students with logistical support for the event noted:

“Although the refugee crisis has faded in prominence in the daily news cycle the difficulties experienced by individuals seeking asylum have in no way diminished. Events such as these remind us of the importance of not looking away in the face of tragedy, in addition to the need to support organisations trying to help individuals in the most desperate of circumstances.”

The CAJ SPBC is made up of UCL Laws students who work closely with the Centre for Access to Justice to promote, evaluate, and shape the pro bono programme at UCL Laws. In addition to raising awareness of and promoting pro bono opportunities to their fellow students, the Committee is also responsible for organising events related to access to justice, human rights and careers in the public interest.

UCL STAR is a student society that is part of a national network of students groups that work to improve the lives of refugees in the United Kingdom by fundraising and campaigning for refugee, and volunteering for local refugee projects.

Safe Passage, a charity helping unaccompanied child refugees and vulnerable adults find safe, legal routes to sanctuary. To date, Safe Passage have helped hundreds of unaccompanied children seeking asylum in France, Greece, Italy, Syria, Sudan and elsewhere across the world to be reunited with their relatives. In the UK the charity additionally supports clients with transitioning into a new life and integrating into society.