Bentham House, home to UCL Laws since 1965, has been shortlisted for an Architect's Journal Retrofit Award 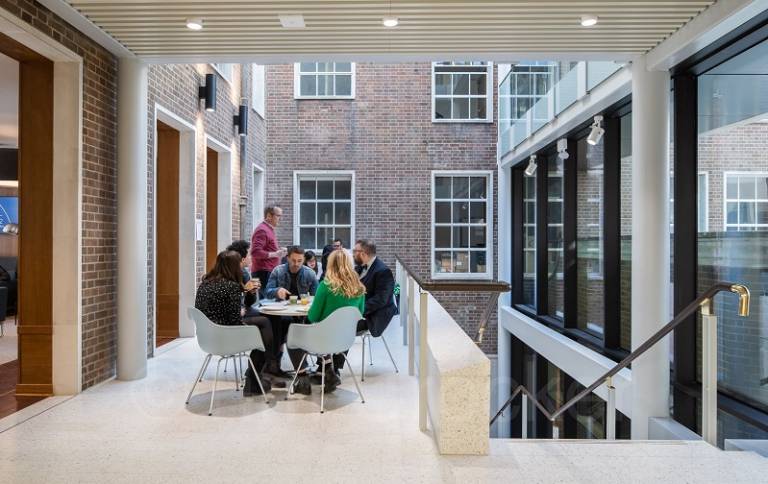 UCL Faculty of Laws is delighted that our home, Bentham House, has been shortlisted for an Architect's Journal Retrofit Award in the Higher Education category.

The AJ Retrofit Awards recognise and celebrate design, engineering and construction excellence that prolongs and improves the life of the built environment.

The Faculty returned home to Bentham House in March 2018, following a major three-year redevelopment project. The building, officially opened by Baroness Hale, President of the Supreme Court of the UK in June 2018, has been transformed, offering 1500sqm of additional space, while maintaining and protecting the much loved Grade II listed rooms and features for the future.

Now occupying 6141sqm and reaching a height of 44.863m, Bentham House has almost 400 more student seats than ever before. Tutorial rooms sit alongside new offices, meeting spaces and common rooms for staff and students.

A bright and modern five story glass atrium at the very heart of the building hosts a café and social space for all of the UCL Laws community to come together.

The imaginative redesign of Bentham House was created by architects Levitt Bernstein, in collaboration with UCL Laws and UCL Estates as part of Transforming UCL, the largest capital programme in the university’s history. The plans were desperately needed in response to an ageing building, modern methods of learning and an expanding body of students and staff.

The 2018 winners will be announced at an awards ceremony at the Brewery in London on 12 September.