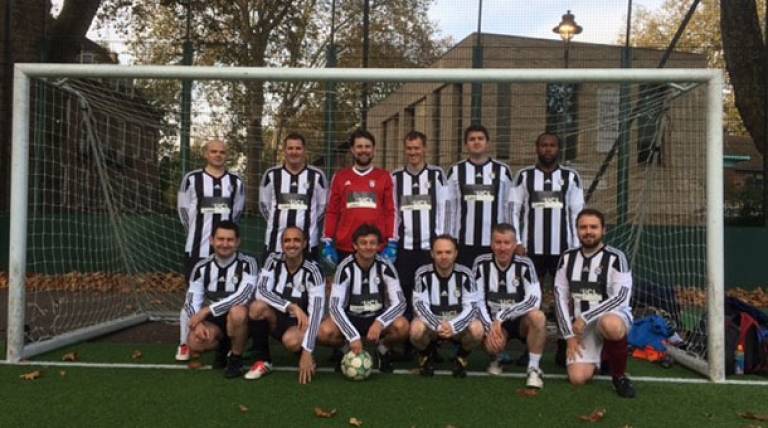 “All I remember is that it was a bright, mild afternoon, and morale was at an all-time high as we tore the labels off our shiny new shirts, with Jeremy Bentham (1748–1832), and four stars, embroidered on our chests, while we awaited the arrival of our opposition.

We paused, momentarily, for an exceptionally tasteful team photograph, before beginning some light stretching.

Following some brisk warm-up exercises, and some shooting practice in order to give Peter ‘Safe-Hands’ Donald some quick practice between the sticks, we kicked off at 1pm sharp.

Carat FC were fearsome opponents, but their defences were no match for the early pressure from the on-rushing Bentham Academicals midfielders and strike force.

Some excellent, liquid build-up play led to two throw-ins in quick succession down the right flank. After temporarily regaining and subsequently losing possession in midfield, Carat FC were unable to halt the advances of quick-footed Alex Mills, who tangoed past two defenders and slotted home from 7 yards out to make the game 1–0 (‘5).

Not only had we scored for only the second time in our history, but we had scored first without conceding 7-8 goals beforehand.

Our opponents continued to experience a difficult and highly fraught first thirty minutes, and appeared unable to get the ball out of their own half of the field. In one or two of their infrequent ventures into our half of the pitch, their hopes and dreams were quickly turned to ashes by the highly reliable central defensive stalwart Henry Balogun, whose performance reminded the gathered onlookers of Des Walker in his prime.

With the help of some skilful wide-play and a plethora of one-twos, we broke forward once more, winning a corner. The ensuing ball ricocheted around a panicked Carat FC defence, and they appeared unable to clear the ball and obviate the danger. The ball broke to the edge of the penalty area where there was lying in wait, lurking—like the instinctive goal-mouth predator that he is—Prince Saprai, who rifled it home to make it 2–0 (‘16).

After the second goal, Carat FC appeared to regain some composure in all areas of the pitch. They adopted a devil-may-care attitude which led to the Bentham Academicals looking rather more at-risk than they had throughout the whole game to this point. Fortunately, following a handful of shots—one ballooned over the cross-bar, another drilled low and hard towards the bottom corner but saved acrobatically—the Bentham Academicals went in at half-time two goals to the good.

Following the interval we were buoyed by a much-needed motivational team talk by player-manager Ben McFarlane.

However, Carat FC continued their renewed form from the end of the first half and began to pile on the pressure. At times, we looked shaky, but we kept our shape, and a combination of a consistent focus on formation and elegant, passing football, we withstood the Carat onslaught and began to contemplate the prospect of keeping a clean sheet.

In the final quarter of the game, the pace began to slow down somewhat, but the play was interspersed with flurries forward by Carat FC, but who could not capitalise upon any of their chances. Further fine saves were dished out by Peter Donald, who dove flamboyantly to meet every attempt at our goal.

The final five minutes saw Carat throw everything forward in desperation, but in a high-intensity break and following a lung-busting run, Oliver Tomlinson broke through the opposition back-lines and drilled the ball into the back of the net to make it 3–0 (56’).

The next game will see Team UCL v Manning Gottlieb FC at Coram’s Fields on 24 November 2016 at 1pm.