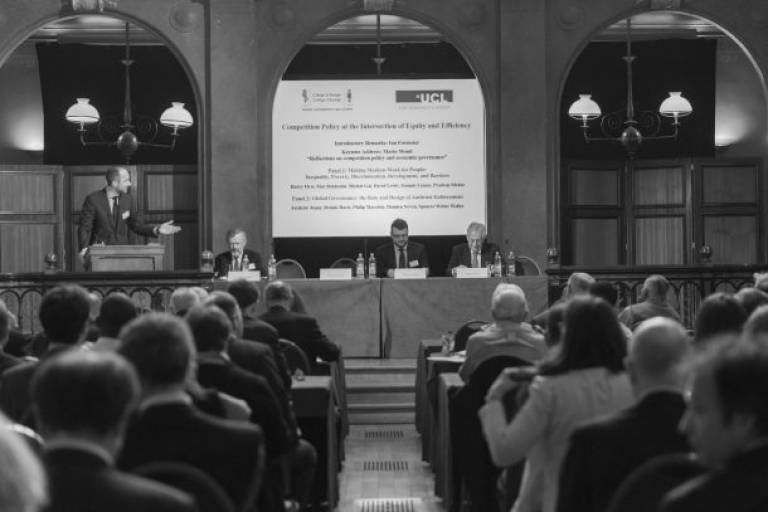 The Centre for Law, Economics and Society (CLES) at UCL and the Global Competition Law Centre at the College of Europe co-organised an important event on the topic of Competition Policy at the Intersection of Equity and Efficiency.

The tension between “equity” and “efficiency”, and a possible trade-off between these objectives, has been one of the major questions bedevilling economics and, more generally, political philosophy in liberal democracies, but also beyond. In particular, the equity versus efficiency trade-off debate has played a defining role in the transformation of the dominant paradigm governing competition law enforcement at least since the late 1970s due to the growing influence of economics and economists in competition law and policy discourse, and the internationalisation of antitrust. The debate remains crucial today as issues of inequality and its interaction with efficiency become of central concern to policy and decision-makers in competition law, as well as in other spheres of public policy. Yet, despite their central role in the grammar of competition law on the global plane, few scholars have explored the intellectual underpinnings of the interactions between “equity” and “efficiency” in the context of competition/antitrust law.

The conference honoured the work of Professor Eleanor Fox, from NYU law school, a pioneer in the field, and the author of a body of work directly engaging with the conceptualization of the relationship between “efficiency” and “equity” in competition law, drawing lessons for U.S antitrust law, EU competition law and the competition law systems of emergent and developing countries. As the former European commissionaire for Competition Policy and former Italian Prime Minister, professor Mario Monti, and Judge Diane Wood, from the U.S. Court of Appeals, highlighted in their key-note speeches, professor Fox has been “antitrust’s invaluable outsider”, always challenging cleverly the mainstream in the United States and being an “ambassador” for European competition law, but also emerging and developing countries’ competition law at the global scale.

The conference united a great number of professor Fox’s friends and colleagues, including the two co-organisers of the event, Professor Ioannis Lianos and Dr. Damien Gerard, who were her research assistants during their student time in New York, but also no less than two former prime-ministers, a former European Commissionaire in the area of competition law, judges from the Court of Justice and the General Court of the EU, the chief judge of the U.S. Court of Appeals for the Seventh Circuit, the President of the South African Competition Tribunal, the former head of the WTO Appellate Body, the chief economist of the European Commission, many heads of units at the DG Competition, European Commission and a selection of the most prominent academics in competition law & policy globally.

But the event proved to be more than just a celebration of professor Fox’s scholarship. It also provided the first, to our knowledge, direct engagement in competition law scholarship in Europe with issues of equity in the context of competition law. Indeed, many of the interveners commented that the conference set a different tone and that it may mark the shift of competition law scholarship towards a broader perspective that is not just limited to the quest for economic efficiency, but engages more fully with equality and fairness concerns. As professor Lianos highlighted this trend in his presentation on the “poverty of competition law”. Departing from the assumption that, contrary to the current mainstream, which focuses on efficiency, consumer welfare and/or the preservation of the competitive process, the struggle against inequality and poverty may become the driving intellectual force of competition law, what he named as the “equality-driven” competition law, Lianos revisited the debate between “egalitarians” and “prioritarians”, as well as critical accounts of the distinction, and explored if the existing conceptual baggage of competition law is ‘rich’ enough to take account of this new direction, or if other concepts may need to be invented or transplanted from other fields.

Many speakers attempted to unveil the many faces and facets that inequality involves in the antitrust context and addressed arguments in favour of integrating inclusive growth as an objective of competition law, as well as the necessary institutional changes this may bring on a local, regional but also global scale. Many of the speakers put emphasis on the issue of global governance of antitrust. Professor Fox highlighted in her concluding remarks the need for a “view from the top”, which is crucially lacking in the current nascent global institutional framework. Judge Dennis Davis rightly observed the important challenges trans-national production through global supply chains sets to competition law enforcement. Others, such as Bert Foer discussed the different cultural values that countries carry with them and may incorporate within their competition regimes, indicating that the quest for global convergence may be illusory. Professors Schweitzer and Drexl examined the impact of competition law in regulating the digital economy and, as professor Drexl, put it the “digital markets for ideologies” and raised important questions as to the link between antitrust and democracy.

This intellectual feast ended with a wonderful dinner with an intervention by professor Valentine Korah from UCL, a long-time friend and colleague of professor Fox, as well as the closing remarks of Dr. John Fingleton, the former ehad of the International Competition network and the UK Office of Fair Trading.

The conference proceedings will be published in a collected volume co-edited by professor Ioannis Lianos and the conference theme will be one of the main research initiatives followed by the Centre for Law, Economics and Society, in collaboration with a number of global partners in the following academic year. The CLES is indeed organizing a roundtable in London on June 21st in order to discuss the intersection of competition law and inequality.