During the Graduation Ceremony in July 2016 at the Royal Festival Hall, the UCL Faculty of Laws awarded an honorary LLD to Judge Dean Spielmann 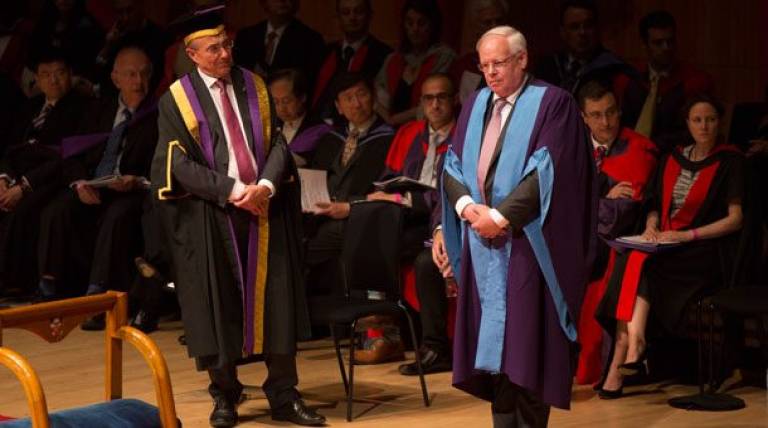 Judge Spielmann is a distinguished international judge, widely regarded as the leading human rights judge of his generation. He was elected as a Judge to the European Court of Human Rights in Strasbourg in 2004, and became President in 2012. In 2016, he was appointed Judge to the Court of First Instance of the European Union.  Prior to his remarkable judicial career, he worked as a lawyer and barrister in Luxembourg. Judge Spielmann has taught at the Catholic University of Louvain, the University of Luxembourg, the University of Nancy 2 and at UCL. Since 2013 he has been Honorary Professor at UCL. He is also Honorary Fellow at Fitzwilliam College, University of Cambridge, and Honorary Bencher of Gray’s Inn, in London.

Since being elected to the European Court of Human Rights, Judge Spielmann has made an outstanding contribution to the development of the Court’s work. Having sat on numerous cases as judge and as President, Judge Spielmann has had significant personal influence on the development of the case law. His intellectual excellence, and his independence of mind, is reflected in the contribution that he has made to important judgments, and in a series of separate and, occasionally, dissenting opinions. In his Presidential role, he has also played an important part in increasing the productivity of the Court, promoting its work, and engaging in dialogue with the judiciary in national and supranational orders. In this context, he also engaged in dialogue with the UK senior judiciary, an interaction that has been very fruitful for all sides. Judge Spielmann is held amongst the highest esteem around the world, both for his contribution to the Strasbourg Court, but also as a leading figure in human rights scholarship.

Judge Spielmann has strong links to UCL, and has provided over the years both great intellectual support and inspiration. Since 2007 he has taught graduate students in the LLM degree, he has set up a Moot Court in Strasbourg with other Judges for UCL students, he has given an exclusive interview to UCL Law students, which was published in the UCL law student journal, Silk v Brief. In March 2014 he took time out of a busy judicial schedule to deliver a lecture, which was published in Current Legal Problems, our flagship publication. The lecture was widely recognised by the audience to be an outstanding elucidation of the current challenges for the legal protection of human rights in a globalising world. Last June, he led a panel discussion at UCL discussing issues arising of the book of Lady Justice Arden (Court of Appeal), Human Rights and European Law, attended by a distinguished audience from academia, the senior judiciary, students and legal practice. He has also provided support and wise counsel to the UCL Institute of Human Rights, of which he is a Judicial Visitor since 2009.

The Dean of the Faculty of Laws, Professor Dame Hazel Genn, said: ‘We are delighted and honoured to be awarding LLD Honoris Causa to Dean Spielmann who has contributed with such conspicuous distinction to the jurisprudence of the ECtHR and the promotion of dialogue between the court and judiciaries around the world. We look forward to working even more closely with judge Spielmann in the future’. Dr Virginia Mantouvalou, Reader in Human Rights and Labour Law and Co-Director of the UCL Institute for Human Rights, said: ‘We are proud to have awarded an honorary doctorate to Judge Dean Spielmann, an outstanding judge and an individual who has so brilliantly inspired the human rights and broader legal community at UCL, in Europe and around the world.’